In Other Lands (Hardcover) 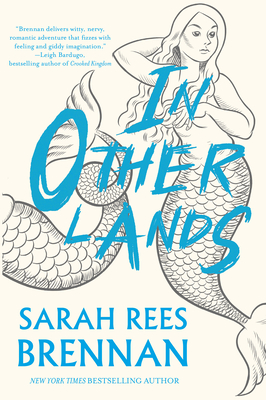 By Sarah Rees Brennan, Carolyn Nowak (Illustrator)
Unavailable at this time.
Out of print

Elliott is pretty sure magic land is awful: everyone appreciates sword fighting more than a witty comeback; his teachers at the Border School refuse to let him sensibly use a pencil instead of a quill; and even though elves, dwarves, mermaids, and harpies are real, they seem hellbent on fighting endless wars with each other. But it's better than home in the real world. And he has two best friends (if his constant rage and sarcasm don't drive them away): a warrior elf maiden, and a shy jock with a big secret. This is a smart, sweet, hilarious book that truly made me laugh out loud.

In need of a mad-cap fantasy-not-fantasy-but-definitely-fantasy-novel? This is it. Follow insufferable Elliott in his insufferable quest to bring peace to insufferable warriors of fairyland. Oh, and talk to at least one mermaid (preferably plural), woo an Elf (at the loser's expense), and navigate the Borderland School (preferably without physical exertion). Perfect for most ages (sorry middle schoolers), all grumpsters, and every know-it-all. Losers can come too. — From Alex

In Other Lands is an exhilarating novel from bestselling author Sarah Rees Brennan about surviving four years in the most unusual of schools - friendship, falling in love, diplomacy, and finding your own place in the world -- even if it means giving up your phone.

The Borderlands aren't like anywhere else. Don't try to smuggle a phone or any other piece of technology over the wall that marks the Border -- unless you enjoy a fireworks display in your backpack. (Ballpoint pens are okay.) There are elves, harpies, and -- best of all as far as Elliot is concerned -- mermaids.

Elliot? Who's Elliot? Elliot is thirteen years old. He's smart and just a tiny bit obnoxious. Sometimes more than a tiny bit. When his class goes on a field trip and he can see a wall that no one else can see, he is given the chance to go to school in the Borderlands.

It turns out that on the other side of the wall, classes involve a lot more weaponry and fitness training and fewer mermaids than he expected. On the other hand, there's Serene-Heart-in-the-Chaos-of-Battle, an elven warrior who is more beautiful than anyone Elliot has ever seen, and then there's her human friend Luke: sunny, blond, and annoyingly likeable. There are lots of interesting books. There's even the chance Elliot might be able to change the world.

Sarah Rees Brennan: Sarah Rees Brennan was born and lives in Ireland. She is the New York Times bestselling author of Tell the Wind and Fire, In Other Lands, and Season of the Witch (Chilling Adventures of Sabrina), among others.