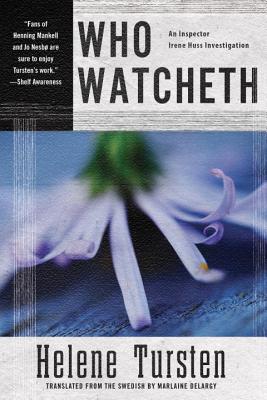 By Helene Tursten, Marlaine Delargy (Translated by)
$26.95
Unavailable at this time.

This is book number 9 in the An Irene Huss Investigation series.

“Tursten does not disappoint in the ninth installment of her impeccable Inspector Irene Huss Investigation series, moving it forward on a perfect note with Irene and her husband, Krister, beginning a new stage in their lives. One of the things I've always admired about this series, in addition to Irene's strength and intelligence, is the normalcy of her life. I loved this book, but I was so busy racing through it to unravel the various threads that now I need to read it again slowly and savor it. You will, too!”
— Eileen McGervey (E), One More Page, Arlington, VA

“These days Scandinavian crime writers are thick on the ground. It’s nice to see that the women can be just as bloodthirsty as the men.” —The New York Times Book Review

He watches the women from the shadows. He has an understanding with them: As long as they follow his rules, they are safe. But when they sin, he sentences them to death.

A woman is found dead in a cemetery, strangled and covered in plastic. Just a few days before her death, the victim had received a flower, an unintelligible note, and a photograph of herself. Detective Inspector Irene Huss and her colleagues on the Violent Crimes Unit in Göteborg, Sweden, have neither clue nor motive to pursue, and when similar murders follow, their search for the killer becomes increasingly desperate. Meanwhile, strange things have been going on at home for Irene: first the rose bush in her garden is mangled, then she receives a threatening package with no return address. Is Irene being paranoid, or is she next on the killer’s list?

Helene Tursten was a nurse and a dentist before she turned to writing. Other books in the Irene Huss series include Detective Inspector Huss, Night Rounds, The Torso, The Glass Devil, The Golden Calf, The Fire Dance, The Beige Man, The Treacherous Net, and Protected by the Shadows. Her books have been translated into 18 languages and made into a television series. She was born in Göteborg, Sweden, where she now lives with her husband.

Praise for Who Watcheth

"The ninth Inspector Irene Huss investigation by this popular Swedish writer is a solid 'people procedural': we get perception and empathy towards victims, suspects, witnesses and police colleagues as Huss investigates an elusive and particularly nasty serial killer in Göteborg."
—The Sunday Times (UK), a December Pick

"When the author ratchets up the fear factor in her ninth Huss novel, she does so to almost stealthy effect.That may not be what some fans expect, but there are more sides to Nordic noir than Dragon Tattoo."
—Chicago Tribune

"Who Watcheth is a prime example of a particular style of crime fiction that leads back through Sjöwall and Wahlöö to Ed McBain, a style that insists upon the alternating mundane and extraordinary qualities of everyday life."
—Los Angeles Review of Books

"Who Watcheth is an engaging mystery with a very likable heroine. With a writing style reminiscent of Camilla Läckberg or Henning Mankell, Helene Tursten offers a detective with a nuanced and compelling personal life, as well as a dark and intriguing mystery. Who Watcheth offers lots of suspense."
—Shelf Awareness

"Tursten takes readers on a creepy, suspenseful journey in Who Watcheth. The intriguing storyline is enhanced by hair-raising details about the killer’s mindset...Who Watcheth will keep readers enthralled from start to finish with its convincing characters and chilling plot."
—RT Book Reviews

"Tursten’s main character has much in common with the detectives imagined by Denise Mina, Tana French, and Karin Slaughter."
—Booklist

"Helene Tursten's latest Irene Huss mystery is even leaner and meaner than previous novels. Tursten does an excellent job of ratcheting up the suspense in this very enjoyable police procedural . . . an exciting tale that can make your skin crawl."
—Kittling Books

"Thorough and detailed . . . Tursten’s novels are definitely on a par with the late Ed McBain’s 87th Precinct series."
—New York Journal of Books

“These days Scandinavian crime writers are thick on the ground. It’s nice to see that the women can be just as bloodthirsty as the men.”
—The New York Times Book Review

“Excellent . . . Incisive . . . The most affecting aspect of this police procedural? Watching the detectives—several of whom have daughters of their own—confront the realities behind what made the victims so vulnerable, realities that cross class and socioeconomic lines.”
—The Boston Globe

“An absorbing, intelligent mystery that holds its own alongside the best feminine hardboiled novels currently being written.”
—Maureen Corrigan, The Washington Post Book World