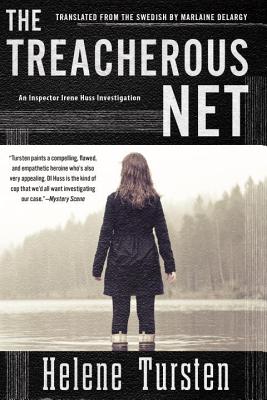 By Helene Tursten, Marlaine Delargy (Translated by)
$26.95
Unavailable at this time.

This is book number 8 in the An Irene Huss Investigation series.

It’s May and the snow has hardly melted in Göteborg, Sweden, but things are heating up quickly for Detective Inspector Irene Huss in the Violent Crimes Unit. The body of a teenage girl is found in the woods, naked and horrifically scarred. Then there’s the mummified body that is discovered bricked up in a chimney on a demolition site, not to mention the city’s ongoing problem with gang violence. With the sudden influx of cases and one detective out on maternity leave, everyone is stretched thin. To make matters worse, Irene feels more than a little intimidated by the new superintendent, Efva Thylqvist, who uses her sex appeal and smooth talking to bend the predominately male staff to her will.

Then a second young girl is found, wearing what appears to be the other half of the sexy lingerie set recovered near the first body. Fearing the two cases are linked and that the killer may strike again, Irene and her colleagues embark on a desperate hunt that takes them deep into a shadowy world of anonymous online predators and insecure teenage girls on a deadly quest for affirmation.

Helene Tursten was a nurse and a dentist before she turned to writing. Other books in the Irene Huss series include Detective Inspector Huss, Night Rounds, The Torso, The Glass Devil, The Golden Calf, and The Beige Man. Her books have been translated into 18 languages. She was born in Göteborg, Sweden, where she now lives with her husband and daughter.

Praise for The Treacherous Net

"Excellent . . . incisive . . . The most affecting aspect of this police procedural? Watching the detectives—several of whom have daughters of their own—confront the realities behind what made the victims so vulnerable, realities that cross class and socioeconomic lines."
—The Boston Globe

"The Treacherous Net is most accomplished in its plot, with several threads exploring history, long-standing social stigmas and the power of the Internet. This fast-paced, gritty thriller offers both a dark story and a striking hero."
—Shelf Awareness

"Tursten has come up with another page-turner."
—Deadly Pleasures

"Huss is nobody’s fool, and she deftly maneuvers her way toward center stage . . . If you like Scandinavian mysteries, this will be right up your alley."
—Bruce Tierney, BookPage

"If Swedish crime has a crowd of gloomy detectives in one corner and a bunch of unlikely crimes in picturesque settings in the other, Tursten plants her flag in the middle: in a place where most of us live. Translator Marlaine Delargy does justice to this author’s straightforward prose style."
—Scandinavian Crime Fiction

"The Treacherous Net is an entertaining read in a very strong and very highly recommended series."
—Kittling Books

"Go ahead and dig into this traditional police crime novel."
—Kingdom Books

"Fans of the genre will not be disappointed by this latest Irene Huss novel.”
—New York Journal of Books

"Fans of the big-name Scandinavian crime-fiction writers (Mankell, Larsson, Nesbø) will be delighted to discover there are already eight books in Tursten’s intriguing series."
—Booklist

"[Tursten] imbues this novel with a cold chill of dread that can't be attributed only to the subfreezing temperatures of Göteborg in winter."
—Chicago Sun-Times

“The cast of characters is a colorful array, each officer vividly and individually drawn . . . Thoroughly engaging and convincingly unraveled.”
—Pittsburgh Post-Gazette

“Fans of Henning Mankell and Håkan Nesser will enjoy Tursten. For readers new to the series, there is no need to start at the beginning. Allow yourself time, this can be easily read in one sitting.”
—Library Journal, Starred Review