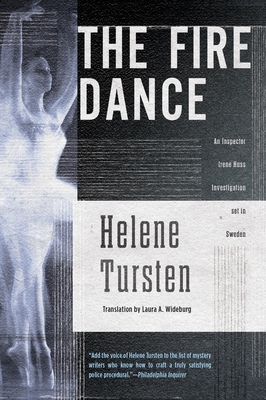 This is book number 6 in the An Irene Huss Investigation series.

Detective Inspector Irene Huss hasn’t seen Sophie Malmborg for over fifteen years, but she’s still haunted by the strange young ballerina’s role in the fire that killed her stepfather. Why had she refused to speak to Irene and the other case workers? Could an eleven-year-old—even one as disturbed and aloof as Sophie—truly be capable of setting her own house on fire?

Irene’s questions resurface when Sophie, now a young adult, disappears, and the charred remains of a dancer are found in an abandoned warehouse. Irene has a startling realization that could shed light on the case that has been lingering in the back of her mind since the beginning of her career.

Helene Tursten was a nurse and a dentist before she turned to writing. Other books in the Irene Huss series include Detective Inspector Huss, Night Rounds, The Torso, The Glass Devil, The Golden Calf, and The Beige Man. She was born in Göteborg, Sweden, where she now lives with her husband and daughter.

Praise for The Fire Dance

"A strong mystery and an interesting setting . . . Readers will also find it entertaining to read about life in Sweden, which is not so foreign that outsiders can’t relate."
—Romantic Times Book Reviews

"As in the previous five installments in the series, Irene juggles her police duties with family life . . . But she prevails somehow in both roles. At the same time, [Tursten] manages to move a crime story forward subtly with panache. Recommended."
—Spinetingler Magazine

"Fans will enjoy the details of Huss’s early career and her continuing family saga . . . Readers of Anne Holt or Mari Jungstedt will enjoy this installment."
—Library Journal

"Irene juggles her police duties with family life, her gourmet chef husband and twin daughters who now exhibit minds of their own in relation to their interests and boyfriends . . . But she prevails somehow in both roles. At the same time, the author manages to move a crime story forward subtly with panache. Recommended."
—Midwest Book Review

"[The Fire Dance] slices realistically into and out of Huss’s professional and personal lives. Not everything is wrapped up neatly by the end . . . mak[ing] the reader both wonder about and anticipate the next installment. This is a great series, the audience for which hopefully will grow exponentially with each subsequent release."
—Book Reporter

"[Fire and] family secrets are at the core of this intriguing mystery [whose] subtle, clever plot development that makes you realize there's complexity . . . that will surface as the investigation proceeds."
—BookLoons

"[Is The Fire Dance] good? You bet it is, especially due to the strong cast of characters Tursten has created—and those characters have more than one surprise in store for readers like me who have followed this series from the start."
—Kittling Books

"For those who enjoy solid police procedurals with a personal twist."
—Scandinavian Crime Fiction

"[Tursten] imbues this novel with a cold chill of dread that can't be attributed only to the subfreezing temperatures of Göteborg in winter."
—Chicago Sun Times