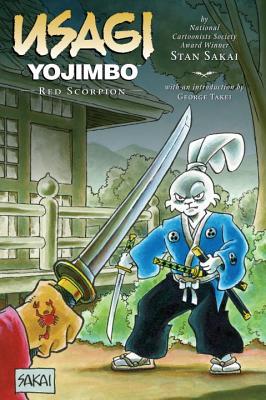 By Stan Sakai, Stan Sakai (Illustrator), George Takei (Introduction by)
Email or call for price.
Unavailable at this time.

This is book number 28 in the Usagi Yojimbo (Dark Horse) series.

The Red Scorpion Gang has been terrorizing the countryside for months, with evidence of their ill deeds appearing everywhere the rabbit ronin turns Usagi first crosses swords with the Scorpions as the gang extorts protection money from poor farmers, then must defend a temple from their attacks. But when Usagi is accused of being a member of the gang, he has no choice but to take the fight to the Red Scorpion himself This volume also features the return of wily thief Kitsune and the mysterious Lord of Owls Collects"Usagi Yojimbo #132-#138" Featuring an introduction by George Takei

Stan Sakai was born in Kyoto, Japan, grew up in Hawaii, and now lives in California with his wife, Sharon, and children, Hannah and Matthew. He received a Fine Arts degree from the University of Hawaii, and did further studies at the Art Center College of Design in Pasadena, California. His creation, Usagi Yojimbo, is the story of a samurai rabbit living in a feudal Japan populated by anthropomorphic animals. It first appeared in Albedo Comics in 1984. Since then, Usagi has been on television as a guest of the Teenage Mutant Ninja Turtles, and as toys, on clothing, in comic books, and in a series of trade paperback collections. In 1991, Stan created "Space Usagi," the adventures of a descendant of the original Usagi, dealing with the samurai in a futuristic setting. Stan is also an award-winning letterer for his work on Sergio Aragones' Groo the Wanderer, the Spider-Man Sunday newspaper strips as well as Usagi Yojimbo. He is the recipient of a Parents' Choice Award, an Inkpot Award, multiple Eisner Awards, two Spanish Haxturs, an American Library Association Award, and a National Cartoonists' Society Division Award. Usagi Yojimbo Book 12: Grasscutter was used as a textbook in Japanese history classes at the University of Portland. There are over twenty volumes of his collected works in print. The author lives in Los Angeles, CA.."