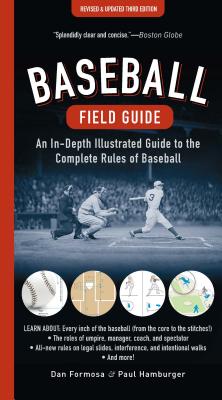 By Dan Formosa, Paul Hamburger
$14.95
On our shelves now:

Baseball season is in full swing and it's time we caught up on the rules of our National Pastime: When is an out an out? Does the strike zone change between Leagues? Are there rules for spectators? Dan and Paul combine clear diagrams and strict rules with delightful anecdotes and not a little humor. Whether you've watched baseball for decades or just started this season, Baseball Field Guide is a great place to start. — From Alex

Now in its third edition—a clear guide to the complete rules of baseball, updated in 2019!

Admit it: Even if you’re a diehard fan of our national pastime, sometimes an umpire’s call can be a little baffling. And for newer fans, Major League Baseball’s nuanced rules—developed and revised over decades—can be downright perplexing.

Now updated throughout with the latest changes, including the no-pitch intentional walk and “bona fide slides” for interferences on a double play, the Baseball Field Guide explains every rule in plain English:
Designed for quick and intuitive searches, this entertaining reference will help you understand every aspect of the game and add to your enjoyment of the sport.

Dan Formosa, Ph.D., spent his grammar school years in Hoboken, NJ, the site of baseball’s first recorded game. A consultant to a wide range of companies and organizations, he has received numerous design awards. He also helped create the Masters in Branding Program at the School of Visual Arts in New York City. Dan travels the world frequently in his work. He spends the rest of his time in Piermont, NY, and in New York City—virtually within throwing distance of Hoboken’s old Elysian Fields. He  grew up playing stoopball and is a diehard Yankees fan.

Paul Hamburger, originally from New York City, is a recent transplant to sunny Los Angeles, where he works as a creative director. Growing up in the streets of Brooklyn, Paul was an accomplished player of stoopball. As a Mets fan, he is bitter and resentful toward the relative success of other local baseball organizations. He lives in the past, nostalgic for the glory days of the mid-eighties.

“A useful and entertaining resource.”—Choice

“Unlike the official rulebook, which has codes as dense as the Dewey Decimal System, this illustrated reference is easy to read and covers everything.”—San Diego Union-Tribune