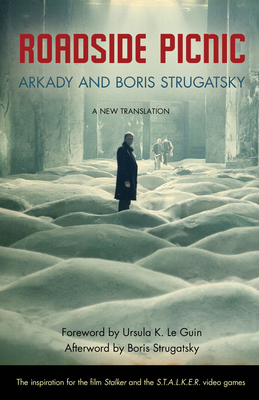 The aliens have already packed up and left as Roadside Picnic begins, but their brief and apparently pointless visit has left the earth irrevocably altered. And in writing this brief, beguiling novel of first contact, the Strugatsky brothers forever altered the terrain of science fiction; their book has gone on to inspire successive generations of artists and writers, most famously Andrei Tarkovsky and Jeff VanderMeer.

In my mind, the thing that really makes this edition essential for science fiction readers is the forward provided by another pillar of the genre, Ursula K. Le Guin. In a few short, pithy pages, Le Guin uses the numerous possible readings of Roadside Picnic--a parable of Soviet failure? a referendum on human intelligence?--to prompt a much broader meditation on the possibilities of the genre.

Red Schuhart is a stalker, one of those young rebels who are compelled, in spite of extreme danger, to venture illegally into the Zone to collect the mysterious artifacts that the alien visitors left scattered around. His life is dominated by the place and the thriving black market in the alien products. But when he and his friend Kirill go into the Zone together to pick up a “full empty,” something goes wrong. And the news he gets from his girlfriend upon his return makes it inevitable that he’ll keep going back to the Zone, again and again, until he finds the answer to all his problems.

First published in 1972, Roadside Picnic is still widely regarded as one of the greatest science fiction novels, despite the fact that it has been out of print in the United States for almost thirty years. This authoritative new translation corrects many errors and omissions and has been supplemented with a foreword by Ursula K. Le Guin and a new afterword by Boris Strugatsky explaining the strange history of the novel’s publication in Russia.

"[A] vivid new translation... it has survived triumphantly as a classic." —Publishers Weekly

"The story is carried out with a controlled fierceness that doesn't waver for a minute."  —Kirkus Reviews

"Brilliantly and beautifully written . . . a truly superb work of science fiction."  —Infinity Plus

"Amazing. . . . The Strugatskys' deft and supple handling of loyalty and greed, of friendship and love, of despair and frustration and loneliness [produces] a truly superb tale. . . . You won't forget it."  —Theodore Sturgeon

"If you're going to read just one Soviet-era Russian science fiction novel, it should be Arkady and Boris Strugatsky's dark, ambiguous Roadside Picnic." —io9

"The Strugatskys' worldview remains both uniquely cutting and replete with humanity . . . The characters' conflicted views of their troubled world make for a read that still feels fresh today. It's also a book that's bound to make you feel a little less sure of humanity's place in the universe."  —Discover

"[T]his is a fantastic book. One of my favorite recommendations of the year." —Boing Boing