Bolano: A Biography in Conversations (Hardcover) 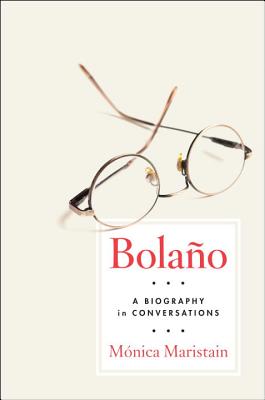 The first biography of Chilean novelist Roberto Bolaño, the author of the international bestsellers The Savage Detectives and 2666

How to know the man behind works of fiction so prone to extravagance? In the first biography of Chilean novelist and poet Roberto Bolaño, journalist Mónica Maristain tracks Bolaño from his childhood in Chile to his youth in Mexico and his early infatuation with literature, to years of tremendous literary productivity in Spain, and to his untimely death and the posthumous and unprecedented stardom that came with the international publication of his novels The Savage Detectives and 2666.

Bolaño: A Biography in Conversations is assembled from a series of rich interviews with the people who knew Bolaño best: we meet Bolaño's first publisher, who printed 225 copies of his first book of poetry; are introduced to his parents and an array of childhood friends, who watched a precocious young man turn into an obsessive writer who barely left the house; and witness the birth of Bolaño's famed Infrarealist literary movement. The book also sheds new light on aspects of Bolaño's life taht have long been shrouded in mystery: for the first time, we learn the details of his final illness and the drama of his final days.

Throughout the book, Maristain present an image far removed from the stereotypes that have been created over the years, with the aim of reintroducing the man whose works grabbed readers worldwide. Maristain writes as a journalist and admirer, impressed with the power of Bolaño’s prose and the cool irony with which he faced the literary world.

MÓNICA MARISTAIN is an editor, journalist, and poet. Born in Argentina, she has lived in Mexico since 2000. She has written for various national and international media, including the Argentine newspapers Clarín, Página/12, and La Nación, and in 1992 she was named Argentina's Journalist of the Year for her coverage of the Barcelona Olympics. She is currently the culture editor of SinEmbargo. Her much-cited interview with Roberto Bolaño, his last interview, was published by Melville House in Roberto Bolaño: The Last Interview and Other Conversations.

“Bolaño: A Biography in Conversations does much to add to our culture's obsession with celebrity and the myths that surround writers in particular... A fun and enveloping read."
—NPR, Best Books of 2014

“[A] major contribution...to a secondary literature that might cast some light on the implications of the Chilean novelist’s work... Poignant reading."
—Los Angeles Review of Books

“A vivid profile of both man and author -- dispelling so many of the erroneous claims about his life that became mythologized as part of his legend and legacy... [An] insightful and impartial glimpse into his life, personality, and dedication to craft."
—the Oregonian

“One gets a more vivid picture of the many worlds in which Bolaño circulated... The volume is brisk and animated, and...unweighted by the burden of mythology that Bolaño’s memory has suffered for the past two decades."
—Cleaver Magazine

“A very human biography of an artist who has posthumously enjoyed a surge in readership in the Anglophone world."
—Full-Stop

“By interviewing his family, friends and fellow writers, Maristain assembles a portrait of Bolaño’s youth in Mexico’s ’Infrarealist’ literary movement, the inspirations for his masterpieces…and his death from liver failure  in 2003, aged 51… The interview format works best when writers relax into talking openly of their friend and his books, as the critic Ignacio Echevarría does when he says Bolaño’s novels grow every time he reads them.”
—the Independent (UK), Best Biographies

Books of the Year, The Scotsman (UK)

“In this first-ever biography of the acclaimed Chilean novelist Roberto Bolaño, a picture emerges of a writer whose childhood eccentricities developed into a fearless drive that was bent on fighting mediocrity with frank talk that earned him enemies."
—Maclean's (Canada)

“A celebratory echo of The Savage Detectives…[with] many lines that could almost have been taken from the novel."
—The Spectator (UK)

“Mónica Maristain has sought...to unveil the 'real' Bolaño through a series of Q & A format interviews with his publishers, former lovers, student friends and literary rivals... Maristain’s book has much to say about Bolaño’s place in Latin American literature."
—The Telegraph (UK)

“Opinions on Bolaño from the people who knew him best… It satisfies a hunger."
—Sunday Times (UK)

“It’s valuable for the vivid impression one takes away of Bolaño the man, the friend, the writer, the husband, the lover, the father… Fascinating reading."
—The Nervous Breakdown

“[A] fascinating narrative that flows as freely as a novel… Absolutely essential for Bolaño fans and scholars alike.”
—Booklist

“In many ways … more fun to read than his novels.”
—Susan Salter Reynolds, Los Angeles Times

“Given how little biographical information about Bolaño is readily available—and given how the myths around the man proliferate—Roberto Bolaño: The Last Interview is a welcome and handy little volume that anyone interested in the author will likely enjoy.”
—The Complete Review

“The Last Interview provides many valuable insights into the mind of this truly revolutionary writer.”
—Rain Taxi