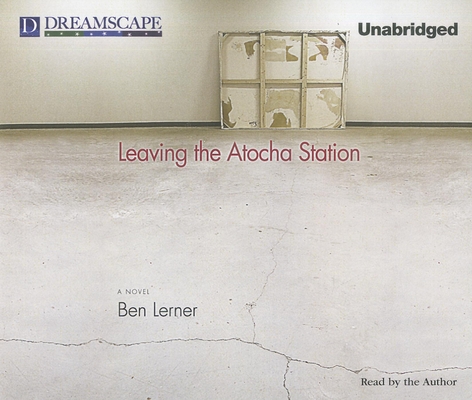 Adam Gordon is a brilliant, if highly unreliable, young American poet on a prestigious fellowship in Madrid, struggling to establish his sense of self and his relationship to art. Instead of following the dictates of his fellowship, Adam's 'research' becomes a meditation on the possibility of the genuine in the arts and beyond: are his relationships with the people he meets in Spain as fraudulent as he fears his poems are? Is poetry an essential art form, or merely a screen for the reader's projections? A witness to the 2004 Madrid train bombings and their aftermath, does he participate in historic events or merely watch them pass him by?

One of the best books of 2011. - Jonathan Franzen
One of the best books of 2011. - The Guardian
One of the best books of 2011. - iTunes
One of the best books from indie publishers in 2011. "[Leaving the Atocha Station] is remarkable for its ability to be simultaneously warm, ruminative, heart-breaking, and funny. Which is all to say that this book is suddenly one of my very favorites and I have a serious crush on Ben Lerner's brain." - Shelf Unbound
One of the Best Fiction Books of 2011. "[Lerner] writes so candidly and exquisitely...a marvelous novel...fully dimensional and compelling..." - The Wall Street Journal
"[A] noteworthy debut...Lerner has fun with the interplay between the unreliable spoken word and subtleties in speech and body language, capturing the struggle of a young artist unsure of the meaning or value of his art...[and] succeeds in drawing out the problems inherent in art, expectation, and communication. And his Adam is a complex creation, relatable but unreliable, humorous but sad, at once a young man adrift and an artist intensely invested in his surroundings." - Publishers Weekly
"Well written and full of captivating ideas…" - Library Journal
"...profoundly evocative...[Lerner] cleverly, seductively, and hilariously investigates the nature of language and storytelling, veracity and fraud..." - Booklist
"...subtle, sinuous, and very funny...beguiling..." - New Yorker
"...explores with humor and depth what everyone assumes is OK to overlook...incredible..." - Star Tribune
"Leaving the Atocha Station proves [Lerner is] a droll and perceptive observer, and a first-rate novelist." - New York Journal of Books
"...one of the most compelling books...flip, hip, smart, and very funny...unlike any other novel-reading experience..." - NPR
"Lerner's prose, at once precise and swerving, propels the book..." - The Daily Beast
"...darkly hilarious...a quintessential modernist expat novel...fiercely contemporary...beautiful, funny, and revelatory." - Book Forum
"This is far from the first novel about a young American finding himself in Europe or a young writer grappling with the problem of authenticity, but Leaving the Atocha Station transcends these tropes when Adam Gordon witnesses the Madrid train bombings of 2004, brutal reminders that the digital age is not defined only by problems of authenticity and language but also by mass violence and terror. Lerner's novel is timely and relevant and, most importantly, a damn good book." - Hey Small Press
"...a hilarious and insightful account of an artist's development in the digital age." - The Outlet
"I enjoyed it so much I read it twice (and laughed out loud both times)." - Lorin Stein, The Paris Review