The Crowdsourceress: Get Smart, Get Funded, and Kickstart Your Next Big Idea (Paperback) 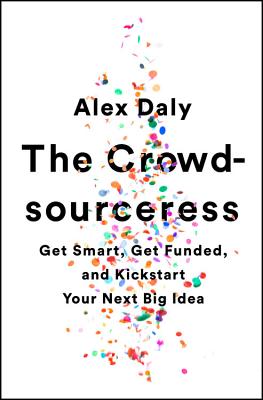 "Neil Young's Pono campaign was the third most successful hardware campaign of all time, and Alex deserves much of the credit, second only to Neil, of course. The Crowdsourceress will give you everything you need to make your campaign a success." -- Phil Baker, COO, Pono

"Owning The Crowdsourceress is like having Alex Daly's 'special sauce' right at your fingertips." -- Jesse Reed, cofounder, Standards Manual

In recent years, the crowdfunding industry has generated several billions in funding. But the harsh reality is that around 60 percent of Kickstarter campaigns fail. Enter Alex Daly, a crowdfunding expert who has raised over $20 million for her clients' campaigns. She has run some of Kickstarter's biggest projects-TLC's newest album, Neil Young's audio player, and Joan Didion's documentary. In this book, Daly takes readers deep inside her most successful campaigns, showing you how to


Here you'll get tangible tools to run your own crowdfunding campaigns and fully connect with the crowd, get people to pay attention, and inspire them to act.

Alex Daly is the founder of Vann Alexandra, a creative services agency that gets projects financed through crowdfunding, and the industry's "Crowdsourceress," a name she received in the press for her expertise in crowdfunding. Her clients include Neil Young, Oscar-winning filmmakers, Pentagram designers, Eric Ries, and girl group TLC. Alex has shared her expertise at top film festivals, universities, and organizations. She is in the Forbes 30 under 30 Marketing & Advertising class of 2016. The Crowdsourceres is her first book.

"Neil Young's Pono campaign is the most successful technology campaign of all time, and Alex deserves much of the credit...The Crowdsourceress will give you everything you need to make your crowdfunding campaign a success."—Phil Baker, COO of Pono

"Having seen Alex Daly in action it is no surprise that she has had such success with so many crowdfunding projects."—Eric Ries, author of the New York Times bestseller The Lean Startup

"The success of our campaigns have been the result of three things: quality content, good storytelling, and crowdfunding management by Alex Daly. I can say with certainty that we wouldn't have surpassed our goals without her involvement, and owning her book, The Crowdsourceress, is like having her 'special sauce' right at your fingertips."
—Jesse Reed, Co-founder of the Standards Manual