No Ordinary Disruption: The Four Global Forces Breaking All the Trends (Paperback) 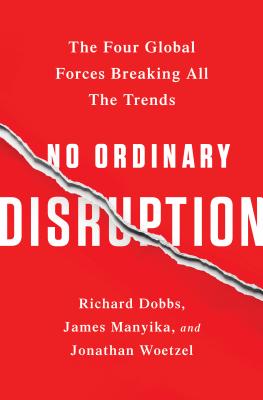 Our intuition on how the world works could well be wrong. We are surprised when new competitors burst on the scene, or businesses protected by large and deep moats find their defenses easily breached, or vast new markets are conjured from nothing. Trend lines resemble saw-tooth mountain ridges.

The world not only feels different. The data tell us it is different. Based on years of research by the directors of the McKinsey Global Institute, No Ordinary Disruption: The Four Forces Breaking all the Trends is a timely and important analysis of how we need to reset our intuition as a result of four forces colliding and transforming the global economy: the rise of emerging markets, the accelerating impact of technology on the natural forces of market competition, an aging world population, and accelerating flows of trade, capital and people.

Our intuitions formed during a uniquely benign period for the world economy -- often termed the Great Moderation. Asset prices were rising, cost of capital was falling, labour and resources were abundant, and generation after generation was growing up more prosperous than their parents.

But the Great Moderation has gone. The cost of capital may rise. The price of everything from grain to steel may become more volatile. The world's labor force could shrink. Individuals, particularly those with low job skills, are at risk of growing up poorer than their parents.

What sets No Ordinary Disruption apart is depth of analysis combined with lively writing informed by surprising, memorable insights that enable us to quickly grasp the disruptive forces at work. For evidence of the shift to emerging markets, consider the startling fact that, by 2025, a single regional city in China -- Tianjin -- will have a GDP equal to that of the Sweden, of that, in the decades ahead, half of the world's economic growth will come from 440 cities including Kumasi in Ghana or Santa Carina in Brazil that most executives today would be hard-pressed to locate on a map.

What we are now seeing is no ordinary disruption but the new facts of business life -- facts that require executives and leaders at all levels to reset their operating assumptions and management intuition.

Richard Dobbs, James Manyika, and Jonathan Woetzel are the directors of the McKinsey Global Institute, the business and economics arm of the global management consulting firm McKinsey & Company.

Richard Dobbs, based in London, has led research on global economic trends, including urbanization, resource markets, capital markets, lifestyle diseases, productivity, and growth. He is a coauthor of Value: The Four Cornerstones of Corporate Finance and has taught at the Said Business School at Oxford University.

Dr. James Manyika, based in Silicon Valley since 1994, has led research on the global economy, disruptive technologies, the digital economy, and productivity. He is the author of a book on robotics as well as technical and business articles. He was appointed by President Obama as the vice chair of the President's Global Development Council. He is a senior fellow at the Brookings Institution, and is on advisory boards at Harvard, UC Berkeley, and Oxford, where he was a research fellow.

Dr. Jonathan Woetzel, based in China since 1985, has led research on urbanization, the global economy, sustainability, and productivity. He also leads McKinsey's Cities Special Initiative and is cochair of the Urban China Initiative. He has authored four books on China, including The One Hour China Book, and is an adjunct professor at the China-European International Business School.