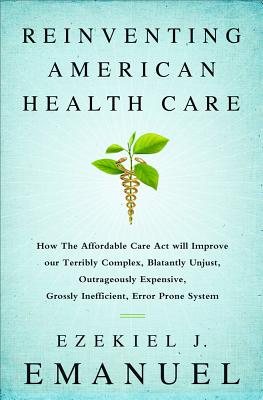 The definitive story of American health care today -- its causes, consequences, and confusions.

In March 2010, the Affordable Care Act was signed into law. It was the most extensive reform of America's health care system since at least the creation of Medicare in 1965, and maybe ever. The ACA was controversial and highly political, and the law faced legal challenges reaching all the way to the Supreme Court; it even precipitated a government shutdown. It was a signature piece of legislation for President Obama's first term, and also a ball and chain for his second.

Ezekiel J. Emanuel, a professor of medical ethics and health policy at the University of Pennsylvania who also served as a special adviser to the White House on health care reform, has written a brilliant diagnostic explanation of why health care in America has become such a divisive social issue, how money and medicine have their own -- quite distinct -- American story, and why reform has bedeviled presidents of the left and right for more than one hundred years.

Emanuel also explains exactly how the ACA reforms are reshaping the health care system now. He forecasts the future, identifying six mega trends in health that will determine the market for health care to 2020 and beyond. His predictions are bold, provocative, and uniquely well-informed. Health care -- one of America's largest employment sectors, with an economy the size of the GDP of France -- has never had a more comprehensive or authoritative interpreter.

Ezekiel J. Emanuel is the Vice Provost for Global Initiatives, the Diane v.S. Levy and Robert M. Levy University Professor, and Chair of the Department of Medical Ethics and Health Policy at the University of Pennsylvania. He is also a Senior Fellow at the Center for American Progress. Dr. Emanuel was the founding chair of the Department of Bioethics at the National Institutes of Health and held that position until August of 2011. Until January 2011, he served as a Special Advisor on Health Policy to the Director of the Office of Management and Budget and National Economic Council. He is a breast oncologist and author of several books, including Healthcare Guaranteed and Reinventing American Healthcare (both PublicAffairs).

“Infused with diagrams, charts, and tables, this book is informative, thought-provoking, and immensely important. Given his role in the program, and as is reflected in the subtitle of the book, Emanuel clearly wants to persuade, but he also wants to explain. And because he was an insider — and proves himself a gifted writer — he makes an able guide to the complexities of the landmark legislation… Clearly, if Obamacare is to fulfill its promise there will need to be significant changes and that will require collaboration among citizens, health care professionals, scholars, and lawmakers from across the political spectrum. And the only way this can happen is if people understand what exactly is at stake. ‘Reinventing American Health Care' spells this out clearly, and by doing so, lays the foundation for this kind of collaboration to occur.”—Dennis Rosen, Boston Globe—-

“Prominent bioethicist Emanuel makes a convincing, albeit onesided, case for overhauling what he sees as an unfair health system in the U.S. Deftly using numbers to make his arguments, Emanuel organizes his book into three parts: the current system (largely its financing), health-care reform (the nearly 1,000-page Affordable Care Act [ACA] and legal challenges to it), and the future (lots of hospital closings) …He also touches on important history (the creation of Medicare in 1965) and clearly explains complicated issues…A plain-English explanation of a tricky topic.”–Booklist

“Few people have had a more favorable influence on the shaping of the current processes of health care reform than Zeke Emanuel has. And no one is a better, clearer, or wiser interpreter of the insanely complex non-system that we are trying to fix. This book is an instant classic—mandatory reading for anyone who wants to know how we got where we are in American health care and where we need to go.” —Donald M. Berwick, MD, MPP, president emeritus and senior fellow
at the Institute for Healthcare Improvement, and former administrator
of the Centers for Medicare and Medicaid Services—-

“With this book, Zeke Emanuel has done the country an immense service. He does the impossible—explain the dysfunctional American health care system—and then takes it one better. For here he also makes the hard-eyed case for understanding that the passage of health reform—of Obamacare—has set us on a path for a health system that works. Our system has left millions without needed care, bankrupt, or both, and tied the fate of their health to where they work. This book explains how we got in this fix, how we will get out of it—and even more boldly, when. If you wanted to read one book to understand health care, this is the one you want.” —Atul Gawande, surgeon, staff writer for The New Yorker, and author of The Checklist Manifesto

“There are thoughtful doctors, savvy policy makers and profound scholars of morality. Zeke Emanuel is the only person in America who is all three. That makes him the right person to write the definitive primer on health care in America. It should be read by anyone who wants to understand what may be the most important set of domestic issues facing America.” —Lawrence H. Summers, former Secretary of the Treasury of the United States, & President Emeritus and Charles W. Eliot University Professor of Harvard University—-

“Zeke Emanuel has written a book that tells people interested health care policy what they need to know but all too often do not. He brings together a staggering variety of information, never before available in one place, on economics, medicine, legislative history, governmental operations, politics, and the gory, boring, and surpassingly important issue of implementation. No single book can tell one all one needs to know about the most complex health care system in the world, but this one comes very close indeed.” —Henry J. Aaron, the Bruce and Virginia MacLaury Senior Fellow in the Economic Studies program at the Brookings Institution

“The author, who serves as a special White House adviser on health care reform, is optimistic that its glitches will be resolved within the year and that it will transform how patients are cared for over the coming decades…He offers an insider's account of some of the infighting that occurred within the Obama administration…The author takes a long view of the reforms beginning with incentives and penalties for the adoption of uniform electronic health records in the 2009 Recovery Act…An important challenge to the naysayers on both sides of the political divide.”–Kirkus Reviews—-

“Whether you agree with his conclusions or not, they're well argued, and he has marshaled an impressive amount of information.”—Washington Post—-