Requiem for the American Dream: The 10 Principles of Concentration of Wealth & Power (Paperback) 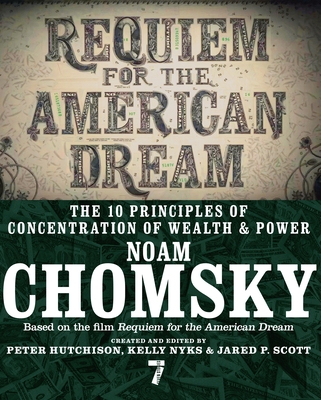 In his first major book on the subject of income inequality, Noam Chomsky skewers the fundamental tenets of neoliberalism and casts a clear, cold, patient eye on the economic facts of life. What are the ten principles of concentration of wealth and power at work in America today? They're simple enough: reduce democracy, shape ideology, redesign the economy, shift the burden onto the poor and middle classes, attack the solidarity of the people, let special interests run the regulators, engineer election results, use fear and the power of the state to keep the rabble in line, manufacture consent, marginalize the population. In Requiem for the American Dream, Chomsky devotes a chapter to each of these ten principles, and adds readings from some of the core texts that have influenced his thinking to bolster his argument.

To create Requiem for the American Dream, Chomsky and his editors, the filmmakers Peter Hutchison, Kelly Nyks, and Jared P. Scott, spent countless hours together over the course of five years, from 2011 to 2016. After the release of the film version, Chomsky and the editors returned to the many hours of tape and transcript and created a document that included three times as much text as was used in the film. The book that has resulted is nonetheless arguably the most succinct and tightly woven of Chomsky's long career, a beautiful vessel--including old-fashioned ligatures in the typeface--in which to carry Chomsky's bold and uncompromising vision, his perspective on the economic reality and its impact on our political and moral well-being as a nation.

"During the Great Depression, which I'm old enough to remember, it was bad–much worse subjectively than today. But there was a sense that we'll get out of this somehow, an expectation that things were going to get better . . ." —from Requiem for the American Dream

Political philosopher, activist, and linguist NOAM CHOMSKY is beloved around the world for the strength of his personal commitment to the truth as he sees it and for the brilliance of his ideas. Born in Philadelphia, Pennsylvania, on December 7, 1928, he studied linguistics, mathematics, and philosophy at the University of Pennsylvania and received his PhD there in 1955. Chomsky has taught at MIT for fifty years and is currently Institute Professor Emeritus in the Department of Linguistics and Philosophy. His linguistics work is widely credited with having revolutionized the field, and his political writings have made important contributions for decades. In 2001, he published 9-11, which became his first international bestseller and was arguably the single most influential post–9-11 book. Chomsky is the author of many other best-selling political works, including Profit Over People, Media Control, Hegemony or Survival, Failed States, Hopes and Prospects, Masters of Mankind, What Kind of Creatures Are We?, and Who Rules the World?

PETER HUTCHISON is an NYC-based filmmaker, educator, and activist. His documentary work includes What Would Jesus Buy? with producing partner Morgan Spurlock; Split: A Divided America; Beyond Activism: Four Decades of Social Justice; and Awake Zion: Rasta, Reggae & Judaism. KELLY NYKS is an award-winning writer/director of documentary films and has worked across Europe, Asia, and America. His prior films include The Age of Consequences, Disobedience, Disruption, Do the Math, Split: A Divided America, and Split: A Deeper Divide. Award-winning writer, director, and producer JARED P. SCOTT's other films include The Age of Consequences, Disruption, Do the Math, and The Artificial Leaf. His films have screened at Tribeca, Hot Docs, Sheffield, and IDFA, and have aired/streamed on Netflix, Starz, PBS, and Al Jazeera.

"A primer in Chomsky’s analysis of the faults of the American political and economic system. Taking as its backbone the idea that 'a significant part of the American Dream is class mobility: You’re born poor, you work hard, you get rich,' Chomsky systematically documents the many ways the system is rigged from top to bottom to ensure that corporations always win." —Bill Moyers

"Since Thomas Piketty’s Capital in the 21st Century, income inequality has not been novel material for a book. Nevertheless, the latest book from famed activist and linguist Chomsky (Who Rules the World?) seems fresher than almost any title on the subject in recent memory. The book, based on the documentary of the same name, is a compilation of interviews that the film’s directors conducted with Chomsky from 2011 to 2016. Chomsky observes the present-day United States with such lucid clarity that readers may feel they are viewing familiar terrain for the first time. He offers a '10 Principle' formula for how plutocratic interests operate (Principle No. 7 is 'Engineer Elections'; Principle No. 3 is 'Redesign the Economy'). Chomsky observes that much of what made the 1950s and ’60s the 'Golden Age' of the U.S. economy was that, at the time, what was good for General Motors really was good for America: 'When the U.S. was primarily a manufacturing center, it had to be concerned with its own consumers.' Chomsky also touches, fascinatingly, on subjects as diverse as 'the psychology of nagging' (as employed by the advertising industry) and the disappearing sense of solidarity in our civic life. Chomsky and his collaborators have created a perceptive and revelatory examination of the forces driving America inequality." —Publishers Weekly

"Noam Chomsky in Requiem for the American Dream directs the fierce light of his intellect on the utopian ideology of neoliberalism, the absurd idea that markets should dictate all aspects of human society. He dissects the disastrous consequences of this ideology for our society, culture, and politics. He explains how corporations indoctrinated the public, academia, and the mass media to sign on for a project that has devastated the lives of working men and women and obliterated the common good. Every promise made by the proponents of neoliberalism is a lie. Its power to write its own laws and regulations, Chomsky points out, has ultimately created a mafia economic system and a mafia political system that is exemplified in the rise to power of the demagogue Donald Trump." —Chris Hedges, Pulitzer Prize-winning journalist and author of Wages of Rebellion: The Moral Imperative of Revolt

"While many books attempt to explain how we got to this political moment (some successfully), Noam Chomsky’s latest, Requiem for the American Dream, provides necessary historical context. Zooming in on ten ways that government and corporate interests have kept the American people down, Chomsky offers a compelling history that explains today’s economic and political landscape. At 157 pages, it’s a short, beautifully put together book." —Huffington Post