If This Isn't Nice, What Is?: Advice to the Young: The Graduation Speeches (Hardcover) 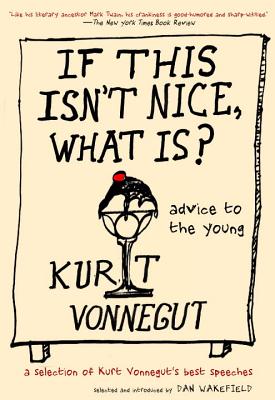 By Kurt Vonnegut, Dan Wakefield (Selected by)
Unavailable at this time.
Unavailable

Best known as one of our most astonishing and enduring contemporary novelists, Kurt Vonnegut was also a celebrated commencement address giver. He himself never graduated college, so his words to any class of graduating seniors always carried the delight, and gentle irony, of someone savoring an achievement he himself had not had occasion to savor on his own behalf.
Selected and introduced by fellow novelist and friend Dan Wakefield, the speeches in "If This Isn t Nice, What Is? "capture this side of Kurt Vonnegut for the first time in book form. There are nine speeches, seven given at colleges, one to the Indiana Civil Liberties Union, one on the occasion of Vonnegut receiving the Carl Sandburg Award. In each of these talks Vonnegut takes pains to find the few things worth saying and a conversational voice to say them in that isn t heavy-handed or pretentious or glib, but funny and serious and joyful even if sometimes without seeming so.

Born in 1922 in Indianapolis, Indiana, KURT VONNEGUTwas one of the few grandmasters of modern American letters. Called by the"New York Times" the counterculture s novelist, his works guided a generation through the miasma of war and greed that was life in the U.S. in second half of the 20th century. After a stints as a soldier, anthropology PhD candidate, technical writer for General Electric, and salesman at a Saab dealership, Vonnegut rose to prominence with the publication of"Cat s Cradle"in 1963. Several modern classics, including"Slaughterhouse-Five," soon followed. Never quite embraced by the stodgier arbiters of literary taste, Vonnegut was nonetheless beloved by millions of readers throughout the world. Given who and what I am, he once said, it has been presumptuous of me to write so well. Kurt Vonnegut died in New York in 2007.

A longtime friend of Kurt Vonnegut s, Dan Wakefield edited and introduced "Kurt Vonnegut: Letters." Wakefield is the author of the memoirs "New York in the Fifties" and "Returning: A Spiritual Journey." His novel, "Going All the Way" was made into a movie starring Ben Affleck. Wakefield also created the NBC prime time series, "James at Fifteen." He lives in Indianapolis, Indiana."""

“Like [that of] his literary ancestor Mark Twain, Kurt Vonnegut’s crankiness is good-humored and sharp-witted.”—A.O. Scott in The New York Times Book Review