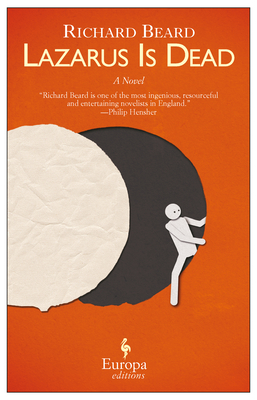 Richard Beard gives the New Testament a Milan Kundera-like treatment here where the narrative novel and the imaginative esay flow freely back and forth in forming and influencing one another in a style that elevates both formats. Through questioning the details in an ancient story thre novel delves into the nature of storytelling itself. It is an smart fun and thoughtful book.

Like most successful men in their early thirties, Lazarus has plans that don't involve dying. He is busy organizing his sisters, his business, and his women. Life is mostly good until far away in Galilee, without warning, his childhhod best friend Jesus turns water into wine. Immediatley, Lazarus falls ill. And with each subsequent miracle his health deteriorates: a nasty cough develops into an alarming array of afflictions unresponsive to the usual remedies. His sisters think Jesus can help, but the two men haven't spoken for years. Lazarus is willing to try anything to make himself well, anything, that is, except ask Jesus for help.

Lazarus dies. Jesus weeps. Lazarus rises. This part we all know. But Lazarus is about to discover that returning from the dead isn't easy at all.

An ingeniously funny and moving novel that disguises itself as biography, Lazarus Is Dead recounts the story of a great friendship lost and regained. Richard Beard's brand of storytelling unabashedly turns convention on its head as he draws on biblical sources, historical detail, art and contemporary literature to throw a spell over his readers that remains unbroken until the final pages of this astonishing story about second chances.

Richard Beard is the author of four novels, including Damascus (Arcade, 1999), a New York Times Notable Book of the Year, and Dry Bones (Secker & Warburg, 2004). He has written three works of non-fiction, and is the Director of the National Academy of Writing in London.

Praise for Lazarus Is Dead

"Richard Beard is one of the most ingenious, resourceful and entertaining novelists in England."
—Philip Hensher

"A thoroughly entertaining elaboration of Lazarus's miraculous life. Lazarus Is Dead is no ordinary novel: it is a brilliant, genre bending retelling and subversion of one of the oldest, most sensational stories in the western canon."
—Sara Keating, Sunday Business Post (Ireland)

"This clever and original book keeps the reader guessing until the death—and beyond."
—The Financial Times

"Beard can stir emotion quickly and simply... His essayistic digressions temper the mythic luminosity of his subject, contributing to the poignance of his imagined 'biography'."
—Laurence Scott, The Times Literary Supplement