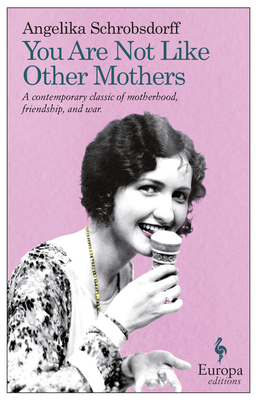 By Angelika Schrobsdorff, Steve Rendell (Translated by)
Unavailable at this time.
Unavailable

You Are Not Like Other Mothers is the story of Else Krischner, a free spirited mother of three sons. The novel spans the first half of the 20th century, from World War I through the Jewish Else’s exile in Bulgaria during World War II. Multi-layered and epic in scope, the narrative incorporates numerous sub-plots and secondary characters to provide a richly rendered portrait of 20th century Europe.

Angelika Schrobsdorff was born in 1927 in Freiburg. She immigrated to Sofia in 1939 with her mother and returned to Germany in 1947. She married Claude Lanzmann, director of the landmark 1985 documentary Shoah, in 1971, and, after more than a decade in Paris and Monaco they moved to Israel in 1983. Today, Angelika Schrobsdorff lives in Berlin. She is the author of ten novels and two works of short stories.