Mrs. Tim of the Regiment (Paperback) 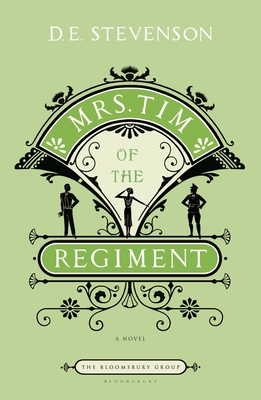 Tenth May, 1934. At this moment I look up and see the Man Who Lives Next Door standing on his doorstep watching my antics, and disapproving (I feel sure) of my flowered silk dressing gown. Probably his own wife wears one of red flannel, and most certainly has never been seen leaning out of the window in it - The Awful Carrying On of Those Army People - he is thinking.

Vivacious, young Hester Christie tries to run her home like clockwork, as would befit the wife of British Army officer, Tim Christie. However hard Mrs Tim strives for seamless living amidst the other army wives, she is always moving flat-out to remember groceries, rule lively children, side-step village gossip and placate her husband with bacon, eggs, toast and marmalade. Left alone for months at a time whilst her husband is with his regiment, Mrs Tim resolves to keep a diary of events large and small in her family life. Once pen is set to paper no affairs of the head or heart are overlooked.

When a move to a new regiment in Scotland uproots the Christie family, Mrs Tim is hurled into a whole new drama of dilemmas; from settling in with a new set whilst her husband is away, to disentangling a dear friend from an unsuitable match. Against the wild landscape of surging rivers, sheer rocks and rolling mists, who should stride into Mrs Tim's life one day but the dashing Major Morley, hellbent on pursuit of our charming heroine. And Hester will soon find that life holds unexpected crossroads...

Mrs Tim of the Regiment is part of The Bloomsbury Group, a new library of books from the early twentieth-century chosen by readers for readers.

Dorothy Emily Stevenson was born in Edinburgh on the 18th, November 1892. She is usually referred to as D. E. Stevenson and during her lifetime she wrote over 40 novels, which were published on both sides of the Atlantic. She married Captain James Reid Peploe in 1916 and had four children. Her first book Peter West was published in 1923 but she did not really start to become a novelist until 1932 with the publication of her first 'Mrs. Tim' book. Dorothy Emily Stevenson died the 30th of December 1973 at the age of 81 and was buried in Moffat, Dumfriesshire, Scotland where she lived for many years.