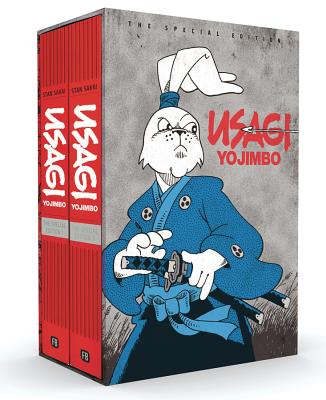 A softcover edition featuring a decade of the popular all-ages, library-perennial graphic novel series—starring a rabbit ronin—in one slipcased set.

Stan Sakai’s Usagi Yojimbo is a popular all-ages graphic novel series that chronicles the action-packed wanderings of a ronin in feudal Japan — as told with anthropomorphic animals. For the first ten years of his career, the battling bunny was published by Fantagraphics Books. This slipcase set collects that entire run (previously published as seven trade paperbacks). With over 1000 pages of story, this is the complete, definitive, early Usagi in a paperback edition, with plenty of extras for fans and collectors.

Usagi Yojimbo is one of the most acclaimed comics of the last 30 years. It deserves as wide an audience as possible. This is a sturdy set, well constructed and respectfully designed. It’s hard to imagine any comics reader who doesn’t already have these stories would regret having this on their shelf.