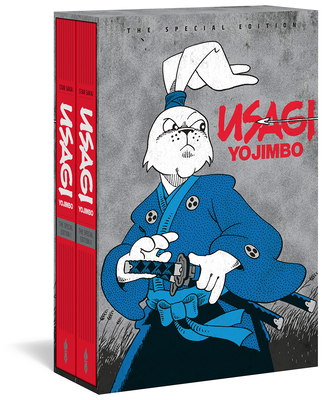 By Stan Sakai
Unavailable at this time.
Out of print

Created in 1984 as a supporting character for the Teenage Mutant Ninja Turtles, Stan Sakai’s Usagi Yojimbo has vaulted to the very forefront of iconic modern comics characters and is a perennial favorite amongst both children and adult fans. Stuffed with engaging supporting characters, villains, and even a romantic interest or two, Usagi Yojimbo chronicles the action-packed wanderings of a masterless samurai (a “ronin”) in feudal Japan — as told with funny-animals. (If Pixar and the late Akira Kurosawa were to collaborate on a movie, it might very well look like this.)

For the first ten years of his career, the battling bunny was published by Fantagraphics Books. In honor of his 25th anniversary, Fantagraphics is releasing a deluxe slipcase set collecting the first seven Usagi books, including the earliest stories; the origin story, “Samurai”; “The Dragon Bellow Conspiracy,” a full graphic novel; and literally dozens more. With over 1000 pages of story, this is the complete, definitive, early Usagi. But that’s not all! This Special Edition (our third in a line of books revisiting Fantagraphics’ most beloved classics, following Palestine: The Special Edition and Ghost World: The Special Edition) will also be brimming with extra material, some from the long-out-of-print hardcover editions of those first seven volumes, some brand new. Just a few of the goodies are a complete full-color gallery of the more than 50 Usagi covers from that period (never-before-collected); many preparatory sketches, including Sakai’s original first draft of the “Samurai” story; two “non-canon” Usagi stories by Sakai co-starring the Teenage Mutant Ninja Turtles (with whom Usagi also shared screen time in the TMNTs’ TV series); and an updated and expanded, long out-of-print and feature-length, career-spanning interview with Sakai from the pages of The Comics Journal.

Usaji Yojimbo is one of the most original, innovative and well-executed comic books anywhere to be found.

— Stan Lee, co-creator of Spider-Man, Iron Man, and the X-Men

Usagi represents a unique fusion of East and West, combining traditional samurai virtues with the flamboyance of Kurosawa’s heroes and the understated authority of a Hollywood frontier marshal.