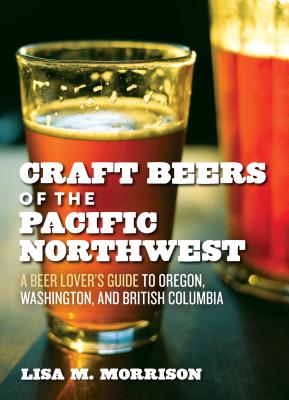 By Lisa M. Morrison
$18.95
On our shelves now at one or more of our stores

In the 1970s a handful of brewers in Oregon, Washington, and British Columbia were tired of the traditional light and flavorless American beers and began exploring ways to make better beer brewed from local ingredients. The “microbrews” (as they were originally called) caught on, and the Northwest quickly became the center of the craft beer movement that is now flourishing and spreading across the United States, Canada, and the world.

Craft Beers of the Pacific Northwest is a suds-soaked adventure through the 115 key breweries and brew pubs in Oregon, Washington, and British Columbia. Lisa Morrison, aka The Beer Goddess, has included every brewery worth visiting, from pioneers like McMenamins, whose Hillsdale Brewery & Public House in southwest Portland was the first brewpub in Oregon, to a new generation of start ups like Upright Brewing, a production brewery that is creating French-Belgian inspired, open-fermented beers.

With 18 walkable pub-crawls, a beer primer and glossary, a list of the best bottle shops, Craft Beers of the Pacific Northwest has everything a beer lover needs to navigate the best of what the region has to offer.

Lisa Morrison, also known as The Beer Goddess, is host and producer of “Beer O’Clock!,” the Pacific Northwest’s only weekly, hour-long commercial radio show devoted to craft beer. Lisa is a regular columnist for the nationally distributed publications Beer Advocate and Celebrator Beer News and is the first and only female contributor to “Beer Talk” in the national magazine, All About Beer.

Lisa was chosen as one of the three original recipients — and the first female recipient — of the national Beer Journalism Awards, presented by the Brewers Association, for a column she wrote about the benefits and traditions of serving beer instead of wine at the Thanksgiving table.

When she is not writing or talking about beer, Lisa and her husband, Mark, enjoy traveling with their Samoyed dog, Yeti — if for no other reason than to be reminded that there's "no better beer than here."

“The ultimate guide for locals looking to have a perfect time enjoying the craft beers of the Pacific Northwest.” —Portland Book Review

“If you don’t live or regularly travel to the Pacific Northwest, watch out. You’ll be itching to toss this book into a bag and board a flight.” —Serious Eats

“A well-written and entertaining travel guide to the best breweries and pubs in this region.” —ItsPubNight.com

“I will need to buy several copies as I am going to wear them out as I use them as my new ‘where do we go next?’ guide in the Pacific Northwest.” —Brewdad.com

“Morrison employs an entertaining, readable style that imparts a lot of information to the reader without becoming repetitive or stale.” —Vancouver Sun

“This book offers 18 pubcrawls. . . . Grab it, get to Portland, or Seattle, or Vancouver and start wandering.” —Ale Street News

“This comprehensive coverage of our ever-expanding corner of Beervana focuses on all the best of the best.” —Brewpublic

“Will pique your beery interest for years to come, yet is slim enough to slip into your travel bag.” —Antsaint.com