The Irregulars: Roald Dahl and the British Spy Ring in Wartime Washington (CD-Audio) 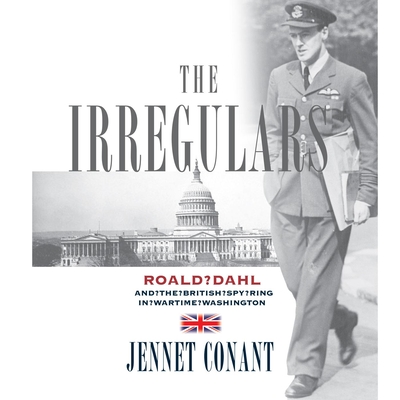 The rollicking true story of British spies who shaped American policy during WWII, told by the bestselling author of 109 East Palace.

When dashing young RAF pilot Roald Dahl (that Roald Dahl) took up his post at the British Embassy in 1942, his assignment was to use his good looks, wit, and charm to gain access to the most powerful figures in American political life. He and his co-conspirators David Ogilvy, Ivar Bryce, and Ian Fleming (that Ian Fleming) called themselves the Baker Street Irregulars after the band of street urchins in some Sherlock Holmes stories. Their goals: to weaken the American isolationist forces, bring the country into the war against Germany, and influence U.S. policy in favor of England. Their mastermind: Churchill's legendary spy chief, William Stephenson, code name "Intrepid," who would later serve as the model for Fleming's James Bond.

Based on never-before-seen wartime letters, diaries, and interviews, this lively account of deceit, doubledealing, and moral ambiguity is richly detailed, carefully researched, and better than any spy fiction.

JENNET CONANT is a journalist who has written profiles for Vanity Fair, Esquire, GQ, Newsweek, and The New York Times.  She is the author of the bestselling Tuxedo Park and 109 East Palace. Conant lives in New York City and Sag Harbor, New York.

SIMON PREBBLE, a British-born performer of considerable talent and experience, has built a successful career that spans the Atlantic. As a stage and television actor he has played in everything from soaps to Shakespeare, but it is as a veteran narrator of some 275 audio book titles that he has made his mark since coming to the U.S. in 1990. Audiofile magazine has named him a “Golden Voice” and in 2004 he was named “Narrator of the Year” by Publishers Weekly. He lives with his wife in New York.

“. . . reads like a classic spy novel. . . . With this excellent history of personalities and politics during World War II, Conant adds successfully to her previous books that have made vivid the war's background players. Highly recommended.”
—Library Journal

“A fascinating look into the unpredictable intersections of experience, ambition and friendships that can form the beginnings of an artist . . .”
—Oregonian

“The Irregulars is a thoroughly enjoyable book . . . Especially enjoyable is the unabridged audiobook of this title, read with full British aplomb and period flavor by Simon Prebble.”
—St. Petersburg Times

“As enjoyable as Conant's history of British spy jinks in wartime Washington is on the page, its pleasures are enhanced by Simon Prebble's vintage British inflections.” [Highly recommended]
—AudioFile