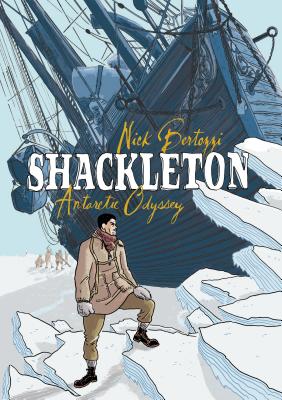 Ernest Shackleton was one of the last great Antarctic explorers, and he led one of the most ambitious Antarctic expeditions ever undertaken. This is his story, and the story of the dozens of men who threw in their lot with him - many of whom nearly died in the unimaginably harsh conditions of the journey. It's an astonishing feat - and was unprecedented at the time - that all the men in the expedition survived.

Shackleton's expedition marked the end of a period of romantic exploration of the Arctic and the Antarctic, and this is as much a book about the encroaching modern world as it is about travel. But Nick Bertozzi has documented this remarkable journey with such wit and fiendish attention to detail that it's impossible not to get caught up in the drama of the voyage. Shackleton is a phenomenal accompaniment to Bertozzi's earlier graphic novel about great explorers, Lewis & Clark.

Nick Bertozzi lives in Queens, NY, with his wife and daughters and is the author and artist of many other cartoon stories, among them The Salon, Houdini: The Handcuff King, and First Second's Lewis & Clark. He is a teacher at the School of Visual Arts.

Nick Bertozzi lives in Queens, NY, with his wife and daughters and is the author and artist of many other cartoon stories, among them The Salon, Houdini: The Handcuff King, and First Second's Lewis & Clark. He is a teacher at the School of Visual Arts.

“Bertozzi's newest graphic novel explores the adventures of another famous explorer, Ernest Shackleton, who led one of the most ambitious expeditions of the Antarctic continent.” —VOYA

“Bertozzi follows legendary explorer Ernest Shackleton from professional nadir to triumphant climax, saving his team from feared abandonment at the bottom of the world . . . The bone-chilling wetness, the numbing cold, and the persistent struggle against hopelessness come through clearly.” —BCCB

“* A top-shelf rendition of one of the greatest survival stories to come out of the Age of Exploration.” —Kirkus Reviews, STARRED REVIEW

“A lighthearted graphic novel packed with detail makes an original contribution to the literature on Ernest Shackleton.” —The Honourable Alexandra Shackleton, granddaughter of Sir Ernest Shackleton and President of the James Caird Society

“This is an expedition drawn out from the pages of the men who described what they saw firsthand, and rather than standing apart and narrating, Bertozzi tells it as though you've gotten in the boat with them. It's personal, jovial, exciting, and when the stakes are high, it's cold, uncertain, and exhausting. We get to know Shackleton and his crew; we want them to succeed.” —Kate Beaton, Hark, a Vagrant!

“Nick Bertozzi's comics do more than bring history to life: they reanimate these long dead souls and make them human again.” —John Hodgman on Lewis & Clark

“STARRED REVIEW: That bleakness is offset by Bertozzi's depiction of the tenacity, camaraderie, and humor of the men, and it's that spotlighting of the crew's unwavering humanity in the face of icy doom that sets this book apart. A must-read for history buffs and fans of cinema-quality visual storytelling alike.” —Publishers Weekly on Lewis & Clark