Were You Born on the Wrong Continent?: How the European Model Can Help You Get a Life (Hardcover) 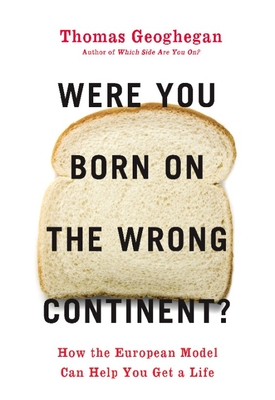 The acclaimed labor lawyer and prizewinning author Thomas Geoghegan asks: where are we better off--America or Europe? In an idiosyncratic, entertaining travelogue that plays on public policy, Geoghegan asks what our lives would be like if we lived them as Europeans. Sneaking out of his workaholic American life, he takes five trips where he tries to understand so-called European socialism firsthand. Though he first tries France (which has become a rhetorical stand-in for the continent as a whole in many Americans' minds), he eventually ventures into Germany to see what some call the boring Europe. There he finds the true other--an economic model with more bottom-up worker control than that of any other country in the world--and argues that, while we have to take Germany's problems seriously, we also have to look seriously at how much it has achieved. Social democracy may let us live nicer lives; it also may be the only way to be globally competitive. This wry, timely book helps us understand why the European model, contrary to popular neoliberal wisdom, may thrive well into the twenty-first century without compromising its citizens' ease of living--and be the best example for the United States to follow. Germany is more generous than the U.S.:
The average number of paid vacation days in the U.S. is 13, versus Germany's 35
New mothers in the U.S. get three months of unpaid job-protected leave and only if they work for a company of 50 or more employees, while Germany mandates four months' paid leave and will pay parents 67% of their salary to stay home for up to 14 months to care for a newborn.
U.S. life expectancy is 50th in the world, compared to Germany's 32nd.

Thomas Geoghegan is a practicing attorney and the author of several books, including the National Book Critics Circle Award finalist Which Side Are You On?, In America's Court, and See You in Court (all available from The New Press). He contributes regularly to The Nation, the New York Times, and Harper's. In 2009, he ran as a progressive candidate for Rahmn Emanuel's congressional seat and was endorsed by Barbara Ehrenreich, James Fallows, Thomas Frank, James K. Galbraith, Hendrik Hertzberg, Alex Kotlowitz, Sara Paretsky, Rick Perlstein, Katha Pollitt, David Sirota, Garry Wills, and Naomi Wolf, among others. Born in Cincinnati in 1949, Geoghegan is a graduate of St. Xavier High School, Harvard University, and Harvard Law School. He has worked as a contributing editor at The New Republic, a lawyer in the United Mine Workers's legal department, and a policy analyst for the U.S. Department of Energy. He is a partner at the law firm Despres, Schwartz, and Geoghegan, where he has worked since 1979. As a public-interest lawyer, he has filed lawsuits to enforce child labor laws, expand voting rights, crack down on the payday loan industry, and require public health measures to stop the spread of tuberculosis among the homeless. As a labor lawyer, he has represented nurses, machinists, railroad workers, steelworkers, teachers, truck drivers, the rank-and-file anticorruption group Teamsters for a Democratic Union, as well as workers who lack the protection of a union. Geoghegan has been awarded a Fulbright scholarship, a German Marshall grant, and fellowships at the American Academy in Berlin and the Institute of Politics at Harvard's Kennedy School of Government.