Unintended Consequences: Why Everything You've Been Told about the Economy Is Wrong (Hardcover) 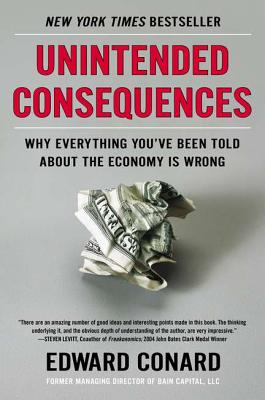 By Edward Conard
Unavailable at this time.
Out of print

In the aftermath of the Financial Crisis, many commonly held beliefs have emerged to explain its cause. Conventional wisdom blames Wall Street and the mortgage industry for using low down payments, teaser rates, and other predatory tactics to seduce unsuspecting home owners into assuming mortgages they couldn't afford. It blames average Americans for borrowing recklessly and spending too much. And it blames the tax policies and deregulatory environment of the Reagan and Bush administrations for encouraging reckless risk taking by wealthy individuals and financial institutions. But according to Unintended Consequences, the conventional wisdom masks the real causes of our economic disruption and puts us at risk of facing a slew of unintended-and potentially dangerous-consequences.

Edward "Ed" Conard is the author of the "New York Times" top-ten bestselling book, "Unintended Consequences: Why Everything You've Been Told About the Economy Is Wrong" (2012). He is a visiting scholar at the American Enterprise Institute. Previously, he was a founding partner of Bain Capital, where he worked closely with his friend and colleague, former presidential candidate Mitt Romney.

In May of 2012, Conard published U"nintended Consequences: Why Everything You've Been Told About the Economy Is Wrong." The book was featured on the cover of the" New York Times" Sunday Magazine and went on to become a N"ew York Times" top ten non-fiction bestseller. Because of the publicity surrounding the publication of his book, Conard was the tenth most searched author on Google in 2012.

Since its publication, Mr. Conard has made over 100 television appearances in which he has debated leading economists including Paul Krugman, Joe Stiglitz, Alan Kruger, Austan Goolsbee, and Jared Bernstein; journalists including Jon Stewart, Fareed Zakaria, Chris Hayes, and Andrew Ross Sorkin; and politicians such as Barney Frank, Howard Dean, and Eliot Spitzer.

Prior to Bain Capital, Conard worked for Wasserstein Perella & Co., an investment bank that specialized in mergers and acquisitions, and Bain & Company, a management-consulting firm, where he led the firm's industrial practice.

Conard has a master of business administration degree from Harvard Business School and a bachelor of science degree in engineering from the University of Michigan.

For up-to-date information on Ed, visit the homepage: www.EdwardConard.com

Become a fan of Ed on Facebookwww.facebook.com/EdwardConard

"Refreshing, at a time when so many take the failure of capitalism for granted, to read a bravado defense of the greatest force for wealth creation that the world has ever known."—BRIAN CARNEY The Wall Street Journal
“Edward Conard’s book presents the most cogent and persuasive analysis of the financial crisis to date. It is deeper and likely more accurate than what we have seen so far from journalists, academics, and particularly former government officials.”
—ANDREI SHLEIFER, 1999 John Bates Clark Medal winner; Former Editor, Quarterly Journal of Economics; Professor of Economics, Harvard University

“Edward Conard’s keen business insight and sharp eye on economic forces explain structural strengths and weaknesses of the American economy. While some of his proposed solutions are controversial, the U.S. economy can recover its mojo if policy makers understand Conard’s diagnosis.”
—GLENN HUBBARD, Dean, Graduate School of Business, Columbia University; Former Chairman, President’s Council of Economic Advisers “Edward Conard provides a provocative interpretation of the causes of the global financial crisis and the policies needed to return to rapid growth. Whether you agree or not, this analysis is well worth reading.” —NOURIEL ROUBINI, Chairman, Roubini Global Economics “Unintended Consequences will be the most talked about economic book in 2012. When Ed Conard points the spotlight at recent economic history, his uncanny ability to cut through the confusion provides something totally unexpected: a fresh, nonpartisan perspective on what is right and wrong with America.”—KEVIN HASSETT, Senior Fellow and Director of Economic Policy, American Enterprise Institute “Edward Conard has written a provocative and important book about the economy that challenges conventional wisdom about the financial crisis, the trade deficit, government policy, and the path to prosperity. I hope policy makers and business leaders will pay close attention to Conard’s framework.”—WILLIAM A. SAHLMAN, Senior Associate Dean, Harvard Business School “Virtually everyone who reads Unintended Consequences will feel the pain of knowing that we may never get EVERYONE to read it. The clarity of Edward Conard’s explana­tion of where we are, how we got here, and what we do now is profound.”—BILL BAIN, Founder, Bain & Company  “There are an amazing number of good ideas and interesting points made in this book. The thinking underlying it, and the obvious depth of understanding of the author, are very impressive.”—STEVEN LEVITT, Coauthor of Freakonomics; 2004 John Bates Clark Medal Winner “This is a wonderful book, filled with wisdom by a guy who really knows what he’s talking bout. It is a must reading for both businessmen and politicians.”—JOHN C. WHITEHEAD, Former Chairman, Goldman Sachs & Co.; Former Deputy Secretary of State

"Conard's contrarian chapter on the benefits of low taxation for the rich is powerfully written. It should be read by anyone who takes for granted the superiority of progressive taxation and has not thought carefully about the trade-offs involved." —The New Republic