Secret History of the Watchers: Atlantis and the Deep Memory of the Rebel Angels (Paperback) 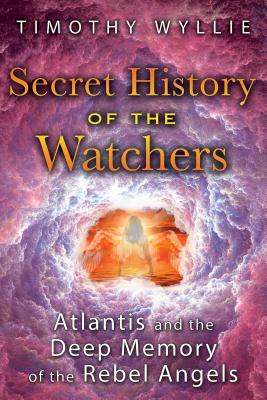 By Timothy Wyllie
$22.00
Unavailable at this time.

Writing together with Timothy Wyllie, the angel Georgia details the events of Earth’s ancient history in the 8th millennium BC

• Reveals how Atlantis had copper mines in North America and tin mines in England, which initiated the Bronze Age and made Atlantis outrageously wealthy

• Interwoven with observations about Wyllie’s current and previous lives, such as his involvement with the Process Church and his profound near-death experience

After Lucifer’s angelic rebellion 203,000 years ago, Earth and 36 other planets were quarantined from the larger Multiverse. Despite aligning with the rebel angels, Georgia--an angel of Seraphic status--was permitted to remain on Earth and continue her role as a Watcher. In this book, Georgia, writing together with Timothy Wyllie, shares her personal account of Earth in the 8th millennium BCE, the first era of Atlantis.

Georgia shares her experiences being present as Atlantis was recovering from the first of three natural disasters that would ultimately destroy it. She reveals how the Atlanteans had become confident mariners, beginning to turn to piracy, and how Atlantean ships had reached the west coast of North America. The copper the Atlanteans mined in North America, together with tin from England, powered the Bronze Age and initiated the first truly technological civilization on Earth, making Atlantis outrageously wealthy. Georgia also shows how Gobekli Tepe was an attempt by Prince Caligastia to sabotage the planet’s electromagnetic energy grid and interfere with mortal ascension, all in order to enslave souls to an endless series of mortal incarnations. After Caligastia put this plan into action, Georgia found that 70 percent of Atlanteans were now rebel angel incarnates--the Multiverse Administration had thwarted his efforts to recycle souls.

Interwoven with Georgia’s narrative of Earth’s ancient history are her observations of Timothy Wyllie’s current and previous lives, including his involvement with the Process Church and his profound near-death experience in 1973. Georgia shares her words, in part, to awaken the 100 million rebel angels currently living their human lives, most unaware of their angelic heritage. She reveals how a mortal incarnation for a rebel angel is an opportunity to redeem their past and help prepare the way for the imminent transformation of global consciousness as the rebel-held planets, including Earth, are welcomed back into the Multiverse.

Timothy Wyllie (1940-2017) was born in Great Britain and raised in London. Having wended his way through an English public school education and then seven years further study at college, he qualified as an architect. In the late 70s, Timothy began a systematic exploration of out-of-body states. This led to experiments in telepathic communication with dolphins and an open invitation to contact with nonphysical beings that continues to this day. During this time, he was also running his own business in New York City, marketing a system he had co-devised for storing and filing color photographs. He retired from the business community in 1981 and turned full time to his creative endeavors. As a musician, Timothy made several tapes of what he called "Bozon Music"--a True Age improvisational jazz, shamanic music of the heart--as well as a series of guided visualization and meditation tapes. Also an artist, he worked on a virtually endless progression of drawings of sacred landscape. It was what brought him most joy. Timothy traveled frequently to give lectures and seminars or to investigate sites and locations for his drawings. He is the author of Ask Your Angels: A Practical Guide to Working with the Messengers of Heaven to Empower and Enrich Your Life, Dolphins, ETs & Angels, the Rebel Angels series of books featured below, and a co-author of Adventures Among Spiritual Intelligences: Angels, Aliens, Dolphins & Shamans.

“Timothy Wyllie was one of our most gifted and grounded explorers of the subjective and subtle realms. Those fortunate enough to travel with him to each of his destinations will receive a balanced education of mind, soul, psyche, and spirit and a gentle initiation into a more expansive and loving cosmos.”
— BYRON BELITSOS, coeditor of The Center Within

“Confessions of a Rebel Angel is Timothy Wyllie’s magnum opus. This saga is brilliant, arresting, and fulfilling; a true story of the esoteric secrets that fester in the human heart that are now awakening the human spirit. Georgia, a juicy and witty rebel angel, comes to us through Wyllie’s engrossing and engaging prose--a totally balanced story of humankind’s evolution and struggles with the forces of the dark and the light. If you want the real truth about the fallen angels, read this book!”
— Barbara Hand Clow, author of Awakening the Planetary Mind

“Read The Return of the Rebel Angels! Timothy Wyllie’s mammoth reconfiguration of humankind’s imprinted perceptions rips apart concepts and questions, dissolving the mysterious shadow worlds and interlaced realms of science to brilliantly expose its reluctant but imminent surrender to strings of holographic universes he calls the Multiverse. Once reason is defeated, the fun really starts as Wyllie’s writing explodes joyously, using The Urantia Book as a cornerstone for comprehension of the past and all futures. Suddenly his proposition seems eminently plausible. Quite a mindblower . . . it’s a delicious meal of mind and vision.”
— Genesis Breyer P-Orridge, author of Thee Psychick Bible

“In The Return of the Rebel Angels, Timothy Wyllie does an extraordinary thing. By guiding us through intimate and telling details of his own life, he reveals the motivations and meanings of the epic we are all now experiencing.”
— Adam Parfrey, the late Feral House publisher and author of Apocalypse Culture

“If you have ever wanted a clear understanding of how the world of angels is structured, The Return of the Rebel Angels will give you a concise picture to use as a foundation to build upon. . . . By harnessing the wisdom of these other-beings, learning their truths and failings and by reconnecting with these entities, we are in a position to take full advantage of the possibilities to come through the coming global transformation.”
— Awareness Magazine

“As humans, our ‘ascension’ potential is our birthright, and in The Return of the Rebel Angels Wyllie proclaims that we’re all ‘doomed to become perfect.’ Way to go!”
— Nexus Magazine

“Timothy Wyllie’s multivolume narrative, of which Rebel Angels in Exile is part, is a masterpiece of writing. It is essential reading for any who would explore the cosmic dimension of mercy suggested in the parable of the prodigal son and the role of those often known as Starseeds in its manifestation upon this and many other worlds.”
— Robert Davis, director of the Daynal Institute

“Revolt of the Rebel Angels and its series is recommended to everyone who is interested in where we have been and where we are going as a planet and as individuals. It will explain a little of what is out there. Once again I can hardly wait for the next volume.”
— Jennifer Hoskins, New Dawn Magazine

“In Wisdom of the Watchers Timothy Wyllie and his guide, Georgia, continue the deep revelations of the hidden histories and lost legacy originally detailed in The Urantia Book. Wisdom of the Watchers is the nexus of a history and destiny that is both personal and universal.”
— Randy Maugans, OffPlanet Radio host

“Awakening of the Watchers is the latest masterpiece by the always inspiring Timothy Wyllie. This book expands you and compels the reader to go deeper into the mystery that is all around and within us. A captivating read that is hard to put down.”
— Paul Samuel Dolman, author of Hitchhiking with Larry David

“Timothy Wyllie’s Awakening of the Watchers is a memoir of the dimensional ecology of the Lucifer Rebellion and the Process Church that creates a living dialogue between the New Earth density and we the reader--the individual soul--a bottom line in any Universe.”
— Alfred Lambremont Webre, author of The Omniverse and The Secret Colony on Mars