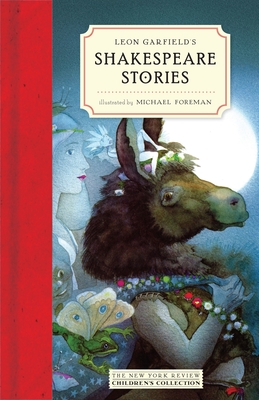 By Leon Garfield, Michael Foreman (Illustrator)
$27.95
On our shelves now at one or more of our stores

How to introduce children to Shakespeare, not just to the stories behind the plays but to the richness of Shakespeare’s language and the depth of his characters: That’s the challenge that Leon Garfield, no slouch as a wordsmith himself, sets out to meet in his monumental and utterly absorbing Shakespeare Stories. Here twenty-one of the Bard’s plays are refashioned into stories that are true to the wit, the humor, the wisdom, the sublime heights, the terrifying depths, and above all the poetry of their great originals. Throughout, Garfield skillfully weaves in Shakespeare’s own words, accustoming young readers to language and lines that might at first seem forbiddingly unfamiliar. Leon Garfield’s Shakespeare Stories is an essential distillation—a truly Shakespearean tribute to Shakespeare’s genius and a delight for children and parents alike.

Leon Garfield (1921–1996) was born and raised in the seaside town of Brighton, England. His father owned a series of businesses, and the family’s fortunes fluctuated wildly. Garfield enrolled in art school, left to work in an office, and in 1940 was drafted into the army, serving in the medical corps. After the war, he returned to London and worked as a biochemical technician. In 1948 he married Vivian Alcock, an artist who would later become a successful writer of children’s books, and it was she who encouraged him to write his first novel, Jack Holborn, which was published in 1964. In all, Garfield would write some fifty books, including a continuation of Charles Dickens’s Mystery of Edwin Drood and retellings of biblical and Shakespearian stories. Among his best-known books are Devil-in-the-Fog (1966, winner of The Guardian Children’s Fiction Prize), Smith (1967, published in The New York Review Children’s Collection), The God Beneath the Sea (1970, winner of the Carnegie Medal), and John Diamond (1980, winner of the Whitbread Award).

Michael Foreman has illustrated more than one hundred books, including those for stories by J.M. Barrie, the Brothers Grimm, Charles Dickens, and Oscar Wilde. His most recent work includes The Seeds of Friendship, which he wrote and illustrated, and the illustrations for Michael Morpurgo’s retellings of Sir Gawain and the Green Knight and Beowulf.

"In these lively and evocative pages a child will hear Shakespeare’s poetry set in prose that will lay the groundwork for many a future enchanted evening at the theater.” –Meghan Cox Gurdon, The Wall Street Journal

"Leon Garfield’s performance in Shakespeare Stories is masterly. The Merchant of Venice, The Taming of the Shrew, Twelfth Night, and A Midsummer Night’s Dream best reveal the virtuosity Mr. Garfield has developed in many years of writing dozens of children’s books and historical novels. In Mr. Garfield’s deft narratives the laughter is the same that one finds in the plays, but so is the uneasiness. He gets the balances right." —D. J. R. Bruckner, The New York Times

"Here is an alternative to yellow study guides, one in which explication is available in the graceful prose. Garfield’s seamless movement between his own descriptive language and Shakespeare’s has never worked better." —Sally Margolis, School Library Journal

"The most accessible introduction to the Bard ever." —Woman & Home