My Face for the World to See (Paperback) 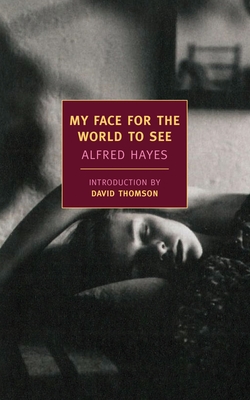 By Alfred Hayes, David Thomson (Introduction by)
$14.95
Unavailable at this time.

Alfred Hayes was known primarily as a screenwriter but this fantastic short novel proves that he was just as great writing fiction as he was for writing for film. This is absolutely the perfect novel about Hollywood - involving a mysterious aspiring actress and a cynical writer who hates Los Angeles.

Alfred Hayes is one of the secret masters of the twentieth century novel, a journalist and scriptwriter and poet who possessed an immaculate ear and who wrote with razorsharp intelligence about passion and its payback.

My Face for the World to See is set in Hollywood, where the tonic for anonymity is fame and you’re only as real as your image. At a party, the narrator, a screenwriter, rescues a young woman who staggers with drunken determination into the Pacific. He is living far from his wife in New York and long ago shed any illusions about the value of his work. He just wants to be left alone. And yet without really meaning to, he gets involved with the young woman, who has, it seems, no illusions about love, especially with married men. She’s a survivor, even if her beauty is a little battered from years of not quite making it in the pictures. She’s just like him, he thinks, and as their casual relationship takes on an increasingly troubled and destructive intensity, it seems that might just be true, only not in the way he supposes.

Alfred Hayes (1911–1985) was born into a Jewish family in Whitechapel, London, though his father, a barber, trained violinist, and sometime bookie, moved the family to New York when Hayes was three. After attending City College, Hayes worked as a reporter for the New York American and Daily Mirror and began to publish poetry, including “Joe Hill,” about the legendary labor organizer, which was later set to music by the composer Earl Robinson and recorded by Joan Baez. During World War II Hayes was assigned to a special services unit in Italy; after the war he stayed on in Rome, where he contributed to the story development and scripts of several classic Italian neorealist films, including Roberto Rossellini’s Paisà (1946) and Vittorio De Sica’s Bicycle Thieves (1948), and gathered material for two popular novels, All Thy Conquests (1946) and The Girl on the Via Flaminia (1949), the latter the basis for the 1953 film Act of Love, starring Kirk Douglas. In the late 1940s Hayes went to work in Hollywood, writing screenplays for Clash by Night, A Hatful of Rain, The Left Hand of God, Joy in the Morning, and Fritz Lang’s Human Desire, as well as scripts for television. Hayes was the author of seven novels, a collection of stories, and three volumes of poetry. In addition to My Face for the World to See, NYRB Classics publishes In Love.

David Thomson is film critic at The New Republic and has been a frequent contributor to Sight & Sound, Film Comment, The Guardian, and The Independent. He is the author of A Biographical Dictionary of Film and, most recently, The Big Screen: The Story of the Movies. He has also written several novels, including Suspects and Silver Light.

"Hayes is a master of the withheld detail...This is an insider's manual for all those who would aspire to fame, the ghostly glamour of the movies, and believe they are entitled to
it."  —Nicholas Lezard, The Guardian

“An exciting, engrossing work, written with beautiful economy and the sure skill of an artist who knows what he is doing.... Mr. Hayes has created characters that are the essence of human hopes and frailty.” —The New York Times Book Review

“The most vivid picture of Hollywood since Nathanael West’s Day of the Locust.” —Nelson Algren

“All of Alfred Hayes’s writing has been marked by a fine grace and finish; and My Face for the World to See is like his earlier books in its quiet control of words and effects. Grace, finish, control—or plain style—are all rare qualities in the generally verbose weather of contemporary prose; and when they appear they must be greeted with honest gratitude and praise.” —Chicago Daily Tribune

“Hayes writes luminously about people who can’t help themselves, who can’t resist the temptations that are set to destroy them.... Hayes has done for bruised men what Jean Rhys does for bruised women, and they both write heartbreakingly beautiful sentences.” —Paul Bailey, The Guardian

“A constant tug back to the LCD of raw humanity is one of the most striking features of Mr. Hayes’s superficially sophisticated writing.... This is an insidious, nasty, nagging book, with a bitter after-taste: but there is no doubt in the world that Mr. Hayes knows what he is about.” —The Irish Times

“In it is captured the essence of Hollywood, the bitterness which lies beneath the pleasant aroma of success and fame.... In the compass of this novel, Hayes, who is one of the best novelists writing today [1958], has captured the ineffable sadness which marches in the van of success, has touched the corrupting qualities of Hollywood which have escaped most of those who have written about this fabled town.” —Los Angeles Times