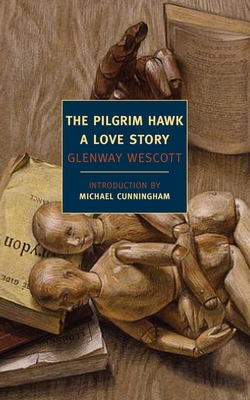 By Glenway Wescott, Michael Cunningham (Introduction by)
Unavailable at this time.
Unavailable

This powerful short novel describes the events of a single afternoon. Alwyn Tower, an American expatriate and sometime novelist, is staying with a friend outside of Paris, when a well-heeled, itinerant Irish couple drops in—with Lucy, their trained hawk, a restless, sullen, disturbingly totemic presence. Lunch is prepared, drink ﬂows. A masquerade, at once harrowing and farcical, begins.

A work of classical elegance and concision, The Pilgrim Hawk stands with Faulkner’s The Bear as one of the ﬁnest American short novels: a beautifully crafted story that is also a poignant evocation of the implacable power of love.

Glenway Wescott (1901–1987) grew up in Wisconsin, but moved to France with his companion Monroe Wheeler in 1925. Wescott’s early fiction, notably the stories in Goodbye, Wisconsin and the novel The Grandmothers (in which Alwyn Tower, the narrator of The Pilgrim Hawk, makes his first appearance), were set in his native Midwest. Later work included essays on political, literary, and spiritual subjects, as well as the novels The Pilgrim Hawk and Apartment in Athens (also available as an NYRB Classic). Wescott’s journals, recording his many literary and artistic friendships and offering an intimate view of his life as a gay man, were published posthumously under the title Continual Lessons.

Michael Cunningham is the author of seven novels, including A Home at the End of the World, Flesh and Blood, The Hours (which won the 1999 Pulitzer Prize in Fiction and the PEN/Faulkner Award), and, most recently, The Snow Queen. He is a senior lecturer of creative writing at Yale University.

“The ever-astonishing Pilgrim Hawk belongs, in my view, among the treasures of twentieth-century American literature, however untypical are its sleek, subtle vocabulary, the density of its attention to character, its fastidious pessimism, and the clipped worldliness of its point of view.”
—Susan Sontag

“[Wescott’s] pulling of the rug of surety from under the reader’s feet is nothing less than what happens to a person proceeding through life. [In the book] I find a deeper, sadder truth: the truth of never being able to get to the bottom of it, of any of it. Of love. Of marriage. Of sex. Of this life itself, so full of appetite and thinking.”
—Jeffrey Eugenides, Lost Classics

“The reader is constantly being repositioned, constantly being forced to see something he didn’t quite see before. Mr. Wescott’s world is self-contained and precarious, and like the real one, endlessly full of meaning.”
—HowardMmoss, The New Yorker

The author has created a strange, tense atmosphere, while telling the story with delicacy and charm.
—Library Journal

“Glenway Wescott was part of a Midwestern movement in American literature during the first decades of this century-the era of Theodore Dreiser’s Sister Carrie, Willa Cather’s My Antonia, Sinclair Lewis’ Main Street, and O.E. Rolvaag’s Giants in the Earth.... [Wescott] remains an appealing and distinctive minor master.
—The Washington Post Book World