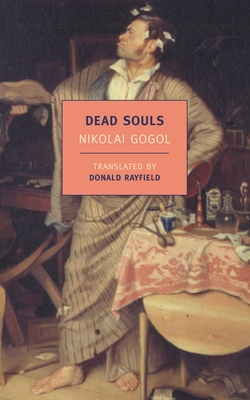 The first of the great Russian novels and one of the indisputable masterpieces of world literature, Dead Souls is the tale of Chichikov, an affably cunning con man who causes consternation in a small Russian town when he shows up out of nowhere proposing to buy title to serfs who, though dead as doornails, are still property on paper. What can he have up his sleeve, the local landowners wonder, even as some rush to unload what isn’t of any use to them anyway, while others seek to negotiate the best deal possible, and others yet hold on to their dead for dear life, since if somebody wants what you have then no matter what don’t give it away. Chichikov’s scheme soon encounters obstacles, but he is never without resource, and as he stumbles forward as best he can, Gogol paints a wonderfully comic picture of Russian life that also serves as a biting satire of a society as corrupt as it is cynical and silly. At once a wild phantasmagoria and a work of exacting realism, Dead Souls is a supremely living work of art that spills over with humor and passion and absurdity.
Donald Rayfield’s vigorous new translation corrects the mistakes and omissions of earlier versions while capturing the vivid speech rhythms of the original. It also offers a fuller text of the unfinished second part of the book by combining material from Gogol’s two surviving drafts into a single compelling narrative. This is a tour de force of art and scholarship—and the most authoritative, accurate, and readable edition of Dead Souls available in English.

Nikolai Gogol (1809–1852), the son of a gentleman farmer who was the author of Ukrainian folk comedies, was born in the Ukraine and grew up on his mother’s family estate. He attended a variety of boarding schools, where he proved an indifferent student and made few friends but was admired for his gifts as a comic actor. In 1828 he moved to St. Petersburg and began to publish stories, and by the mid-1830s he had established himself in the literary world and been warmly praised by Pushkin. In 1836, his play The Inspector-General was attacked as immoral, and Gogol went abroad, where he remained for most of the next twelve years. During this time he wrote two of his best-known stories, “The Nose” and “The Overcoat,” and in 1842 he published the first part of his masterpiece Dead Souls. Gogol became ever more religious as the years passed, and in 1847 he fell under the sway of an Orthodox priest on whose advice he burned much of the second part of Dead Souls and soon gave up writing altogether. After undertaking a fast to purify his soul, he died at the age of forty-two.

Donald Rayfield is emeritus professor of Russian and Georgian at Queen Mary, University of London.

“Gogol's Dead Souls, has achieved a magnificent re-birth. . . . Rayfield's translation is one that Vladimir Nabokov would unreservedly admire. . . . A big, beautiful book and a mould-breaking classic reinvigorated.”