Niki: The Story of a Dog (Paperback) 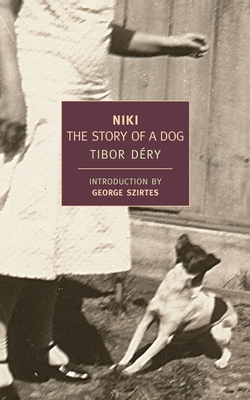 “In the harsh world of Stalinist Hungary, a young, female fox terrier, with a white coat and nut-brown ears, adopts Janos Ancsa and his wife. The middle-aged Ancsas are childless. The year is 1948. When Janos is arrested, what follows is the story of Mrs. Ancsa's and Niki's life together. Those pages are some of the most poignant about our relationship with animals and how a small bitch terrier bestows a state of grace on her owners.”
— Aggie Zivaljevic, Kepler's Books & Magazine, Menlo Park, CA

“The Dog adopted the Ancsas in the spring of ’48”: so the story begins. The Ancsas are a middle-aged couple living on the outskirts of Budapest in a ruinous Hungary that is just beginning to wake up from the nightmare of World War II. The new Communist government promises to set things straight, and Mr. Ancsa, an engineer, is as eager to get to work building the future as he is to forget the past. The last thing he has time for is a little mongrel bitch, pregnant with her first litter. But Niki knows better, and before long she is part of the Ancsa household. The Ancsas even take her along with them when Mr. Ancsa’s new job requires a move to an apartment in the city.

Then Mr. Ancsa is swept up in a political crackdown—disappearing without a trace. For five years he does not return, five years of absence, silence, fear, and the constant struggle to survive—ﬁve years during which Mrs. Ancsa and Niki have only each other.

The story of Niki, an ordinary dog, and the Ancsas, a no less ordinary couple, is an extraordinarily touching, utterly unsentimental, parable about caring, kindness, and the endurance of love.

Tibor Déry (1894–1977) was born in Budapest into a prosperous family of partly Jewish descent. In 1919, he joined the Communist Party and served in the ill-fated revolutionary government of Béla Kun, which collapsed before the end of the year. For much of the next fifteen years he lived in exile, returning to Hungary for good in 1935. Though initially well-regarded by Hungary’s post–World War II Communist government, by 1953 Déry had been expelled from the party for his criticism of its increasingly repressive policies. He then supported Imre Nagy’s reformist government and, after the Soviet suppression of the 1956 uprising, was sentenced to nine years in prison. Writers around the world (including Camus, Sartre, E.M. Forster, Rebecca West, and Alberto Moravia) rallied on his behalf, and in 1960 Déry was not only granted amnesty but allowed to publish and travel in relative freedom. Among Déry’s major works are Love and Other Stories, the novel The Unfinished Sentence, and an autobiography, No Verdict.

George Szirtes is a Hungarian-born English poet and translator. He received the T.S. Eliot Prize for Reel (2004), and his New and Collected Poems were published in 2008. As a translator of poetry and fiction he has won a variety of prizes and awards, including the European Poetry Translation Prize and, in fact, the Déry Prize.

Edward Hyams won the Scott Moncrieff Translation Prize for Joan of Arc: By Herself and Her Witnesses by Regine Pernoud.

"[A]n extraordinary novel...It is Niki’s sheer dogginess, so perfectly rendered throughout, that is at the heart of this novel’s greatness." --Katherine A. Powers, The Boston Globe

“One of Hungary’s leading novelists...Mr. Dery brings a kind of cunning naivete that records (or imagines) with utmost seriousness all the tremors of Niki’s soul. He puts, as it were, the psychological realism of the contemporary novel at the disposal of a fox terrier.” –The New York Times

“Outstanding Hungarian novelist and imprisoned hero of the 1956 revolution.” –The Nation

“Tibor Dery satirized authority in 1956 with a compassionate story of Niki the dog (and underdog) who triumpts-and is then imprisoned.” –The Washington Post

“The greatest depicter of human beings of our time.” –Georg Lukacs

“Tibor Déry was a dissenter, a subversive revolutionary and, in his old age, a jailbird. He was also one of the greatest stylists in the history of Hungarian literature.” –Péter Nádas

“Niki is a masterpiece, like Of Mice and Men, of the presentation of ‘Man’s inhumanity to man.” –Richard Church

“One of the most prominent writers in Hungary.” –The New York Times

“In Niki there is nothing mawkish: one’s heart is truly touched. By centering his seemingly artless story on the figure of a dog–that humblest, most poignant, and tenacious symbol of devotion, of the need to be attached–Tibor Déry has done more than present a contemporary political and human tragedy; he has illumined what might be called canine situation under the aspect of eternity.” –Rosamond Lehmann

“The biggest international success of Déry’s own writing career was his novella, Niki: The Story of a Dog, which appeared in Hungary in 1956 and was soon translated into various languages. It is an apparently simple storyline embodying a sharp critique of hard line Stalinist dictatorship. Here, too, the values are clear, as are their anthiseses: trust versus suspicion, freewill versus coercion, logic versus paranoia, generosity versus pettiness, love versus fear. In the West, no doubt, Niki’s success was helped by the fact that its author was in prison, and was therefore available as Cold War material.” –George Szirtes, Love and Other Stories

“[Déry’s stories] remind me of stories by Toslstoy, Chekhov, Verga, Lawrence and Hemingway. Here is one of the outstanding wrters of the twentieth century.” –Ben Sonnenberg

“Tibor Déry has few equals among writers in Hungarian…[He] is one of the …masters of that great tradition of European realism that we associated with the name of Thomas Mann, and he deserves our close attention.” –Times Literary Supplement (London)

“The strains of making fiction under…pressure show everywhere in Niki: it’s a tiny story, but told, for all it’s simplicity, with a strange effect of density, as if it is compressed under a great weight.” –The Cambridge Quarterly

“…a tender allegory of the years of postwar repression in Hungary.” –The Observer (London)