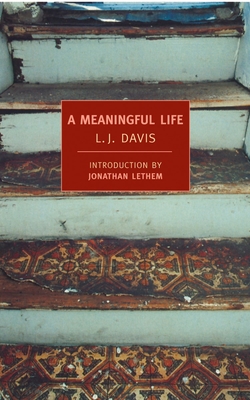 By L.J. Davis, Jonathan Lethem (Introduction by)
Unavailable at this time.
Unavailable

L.J. Davis’s 1971 novel, A Meaningful Life, is a blistering black comedy about the American quest for redemption through real estate and a gritty picture of New York City in collapse. Just out of college, Lowell Lake, the Western-born hero of Davis’s novel, heads to New York, where he plans to make it big as a writer. Instead he finds a job as a technical editor, at which he toils away while passion leaks out of his marriage to a nice Jewish girl. Then Lowell discovers a beautiful crumbling mansion in a crime-ridden section of Brooklyn, and against all advice, not to mention his wife’s will, sinks his every penny into buying it. He quits his job, moves in, and spends day and night on demolition and construction. At last he has a mission: he will dig up the lost history of his house; he will restore it to its past grandeur. He will make good on everything that’s gone wrong with his life, and he will even murder to do it.

L. J. Davis was  an author and prize-winning journalist who has contributed to The New York Times, Mother Jones, and Harper’s, among other publications.

Jonathan Lethem is the author of seven novels, including Motherless Brooklyn and The Fortress of Solitude. He lives in Brooklyn and in Maine.

"... one of the strangest novels I have ever read: a crazed parable in which the protagonist, Lowell Lake, and his marriage undergo a constantly regenerating process of mental and physical disintegration. Quite mad, it can be read poolside, roadside or mountainside: wherever you are, you'll be Lake-side." – Geoff Dyer, The Guardian

"The story, delivered with terrific brio, proceeds as a phantasmagoria of urban decay and heightened obsession. It is also extremely funny if you can put politically correct scruples to the side - which should be easy enough as the true butt of the novel is Lowell himself."    —Katherine Powers, The Boston Globe

"Stultified by his job (editing a plumbing magazine) and his mind-numbing marriage ('a cross between Long Day's Journey into Night and Father Knows Best'), frustrated novelist Lowell Lake welcomes a new obsession: renovating a monstrously dilapidated mansion in a Brooklyn slum. What follows, in L.J. Davis's deadpan 1971 novel A Meaningful Life, reissued by NYRB Classics, is pure chaos, as Lowell confronts a cast of urban squatters, in some of the most brilliant comic turns this side of Alice in Wonderland. A cathartic read for urban pioneers." --O, The Oprah Magazine

"A rediscovered American classic from the 1970s, this is a darkly comic portrayal of broken dreams." --Waterstone Books Quarterly

"Here's a real rediscovery...This strange comic masterwork is compared to the work of Kingsley Amis in Jonathan Lethem's new introduction. That's almost right, but the feel is darker, and there's a touch of Patricia Highsmith too; it's all about gentrification, and, ultimately, madness." --The Los Angeles Times

“He has an erring sense of timing, of taste, of restraint. He has written some truly marvelous passages about New York. He has an absolute eye for the telling detail…An author who is clearly capable, funny at the proper times, both brutally and cheerfully perceptive.” –The New York Times

A novel that “has the authentically crazy tintinnabulation of our times…Mr. Blandings in a situation comedy by Kafka.” –Book World

“[Davis] has a fine comic gift; a clear-eyed view of those who imagine that mere accumulation is life itself.” –Paula Fox

“Davis is seen by some as a kind of Evelyn Waugh of the American urban crisis.” –The Washington Post