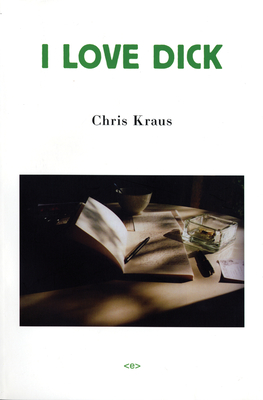 A self-described failed filmmaker falls obsessively in love with her theorist-husband's colleague: a manifesto for a new kind of feminism and the power of first-person narration.

In I Love Dick, published in 1997, Chris Kraus, author of Aliens & Anorexia, Torpor, and Video Green, boldly tore away the veil that separates fiction from reality and privacy from self-expression. It's no wonder that I Love Dick instantly elicited violent controversies and attracted a host of passionate admirers. The story is gripping enough: in 1994 a married, failed independent filmmaker, turning forty, falls in love with a well-known theorist and endeavors to seduce him with the help of her husband. But when the theorist refuses to answer her letters, the husband and wife continue the correspondence for each other instead, imagining the fling the wife wishes to have with Dick. What follows is a breathless pursuit that takes the woman across America and away from her husband and far beyond her original infatuation into a discovery of the transformative power of first person narrative. I Love Dick is a manifesto for a new kind of feminist who isn't afraid to burn through her own narcissism in order to assume responsibility for herself and for all the injustice in world and it's a book you won't put down until the author's final, heroic acts of self-revelation and transformation.

Chris Kraus is the author of four novels, including I Love Dick and Summer of Hate; two books of art and cultural criticism; and most recently, After Kathy Acker: A Literary Biography. She received the College Art Association's Frank Jewett Mather Award in Art Criticism in 2008, and a Warhol Foundation Art Writing grant in 2011. She lives in Los Angeles.

Eileen Myles, named by BUST magazine "the rock star of modern poetry," is the author of more than twenty books of poetry and prose, including Chelsea Girls, Cool for You, Sorry, Tree, and Not Me (Semiotext(e), 1991), and is the coeditor of The New Fuck You (Semiotext(e), 1995). Myles was head of the writing program at University of California, San Diego, from 2002 to 2007, and she has written extensively on art and writing and the cultural scene. Most recently, she received a fellowship from the Andy Warhol/Creative Capital Foundation.

But my favorite example of the genre is from nearly 20 years ago, and it's by a woman. Chris Kraus's 'I Love Dick' offers the story of a woman named Chris Kraus—also an experimental filmmaker, just like the author—reckoning with her unrequited love for 'Dick ____,' a cultural critic with whom she becomes obsessed. The narrative is an exploration of desire as something other than passivity or inadequacy ('I think desire isn't lack, it's surplus energy—a claustrophobia inside your skin') and relentless romantic pursuit not as self-degradation but a kind of generative, creative act.

The most important book about men and women written in the last century.

The intelligence and honesty and total originality of Chris Kraus make her work not just great but indispensable—especially now, when everything is so confusing, so full of despair. I read everything Chris Kraus writes; she softens despair with her brightness, and with incredible humor, too.

—Rachel Kushner, author of The Flamethrowers—

Ever since I read I Love Dick, I have revered it as one of the most explosive, revealing, lacerating, and unusual memoirs ever committed to the page... I Love Dick is never a comfortable read, and it is by turns exasperating, horrifying, and lurid, but it is never less than genuine, and often completely illuminating about the life of the mind.

The biggest art revelation of the year.