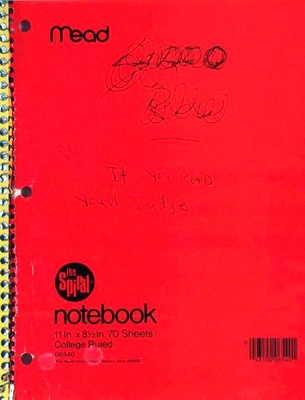 The lyrics notebook and personal journals of Kurt Cobain, iconic singer of the band Nirvana.

Kurt Cobain filled dozens of notebooks with lyrics, drawings, and writings about his plans for Nirvana and his thoughts about fame, the state of music, and the people who bought and sold him and his music. His journals reveal an artist who loved music, who knew the history of rock, and who was determined to define his place in that history. Here is a mesmerizing, incomparable portrait of the most influential musician of his time.

Kurt Cobain was the leader of the groundbreaking Seattle rock band Nirvana.  He died in 1994.

"The year's most fascinating, heart-breaking rock book."—Rolling Stone"An engrossing collection of clues."—Entertainment Weekly"His words kick and scream."—Chicago Daily Herald“Compelling.”—Seattle Times“No editing, no footnotes: The Nirvana singer’s Journals is the year’s most fascinating, heartbreaking rock book.”—Rolling Stone Magazine“Especially riveting.”—The Observer Magazine“Compelling reading...a look into the creative process of one of rock’s true artists.”—The Seattle Times“The daily diary of an American dream—and nightmare...Beneath all the layers of irony and sarcasm and humor and stoner realism, Cobain had a gift for sincerity, which is everywhere evident in his journals...The book is swarming with life, and it’s irresistible to anyone who cares about the music.”—New York Magazine“Illuminating...charming...we catch glimpses of Cobain’s wry, mischievous humor.”—Newsday“Our most elaborate first-hand evidence of the inner life of one of rock’s most important figures.”—New York Daily News“Laced with humor and horror...wrenchingly candid.”—LA Times“Simple and plain, Kurt Cobain was a fuckin’ genius...Journals may become his most enduring body of work. If Cobain’s life was a movie, Journals is the director’s cut, the musings and contemplations of a mad genius. More than that, these passages are some of the most interesting reading I’ve come across in years, and I boldly predict they will stand the immeasurable test of time...Journals, better than any biography could hope to be, will make essential reading for anyone looking to understand the 1990s’ most important pop star.”—Salon.com“It displays the formative stages of a man whose deeply felt empathy became something close to a curse...This remarkable document finally stands as one last message from the saddest teenager in the world, hiding his diary in a drawer near an easy-to-find key.”—Entertainment Weekly“Fascinating and often charming.”—New York Post“I heard Cobain’s voice in my head as I read his journals.”—Telegraph“How could the intimate diaries of one of rock’s most memorable and credible icons be anything less than page-turningly compulsive?...The hype is deserved. You won’t be disappointed.”—The Zone“These hand-written fragments from a life say more than any biography would or could...Cobain was a man who struggled so hard for definition, it seems fitting that, even after death, he should be allowed to speak for himself.”—Evening Standard"Facsimile pages—complete with sketches, margin scribbles, and handwriting in various states of dishevelment—argue for never again typesetting a diary."—MOJO