Seattle Seahawks Super Season: Notes from a 12 on the Best Season in Seahawks History (Paperback) 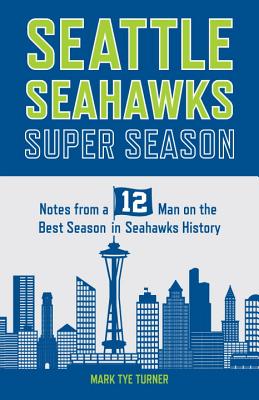 Relive the Seattle Seahawks Super Bowl Season through the eyes of the 12th Man. From the perspective of a dedicated Seahawks fan, Mark Tye Turner, author of "Notes from a 12 Man," com-piles this vivid and insightful account of the year the Seattle Seahawks won Super Bowl XLVIII with coach Pete Carroll and quarterback Russell Wilson. Starting in the 2013 preseason and following through to the aftermath of the team's momentous victory parade, Turner's account of the season is filled with stories and anecdotes from the Seahawks' 38-year history.

MARK TYE TURNER is an Emmy Award-winning television writer/producer who can scratch seeing the Seahawks win a Super Bowl from his bucket list. He was born and raised in the Seattle area and has been a 12 ever since the Seahawks first lit up the Kingdome in 1976. The Seahawks won that day, their first-ever regular season win in Seattle, and Turner's fanaticism began. Turner's first book "Notes From a 12 Man: A Truly Biased History of the Seattle Seahawks" is considered the Seahawk bible by the legion of 12s.