On Mount Hood: A Biography of Oregon's Perilous Peak (Hardcover) 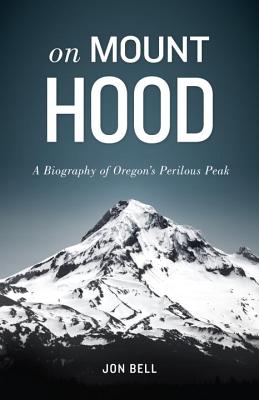 On Mount Hood is a contemporary, first-person narrative biography of Oregon's greatest mountain, featuring stories full of adventure and tragedy, history and geology, people and places, trivia and lore. The mountain itself helps create the notorious Oregon rains and deep alpine snows, and paved the way for snowboarding in the mid 1980s. Its forests provide some of the purest drinking water in the world, and its snowy peak captures the attention of the nation almost every time it wreaks fatal havoc on climbers seeking the summit. On Mount Hood builds a compelling story of a legendary mountain and its impact on the people who live in its shadow, and includes interviews with a forest activist, a volcanologist, and a para-rescue jumper. Jon Bell has been writing from his home base in Oregon since the late 1990s. His work has appeared in Backpacker, The Oregonian, The Rowing News, Oregon Coast, and many other publications. He lives in Lake Oswego, OR.

An outdoor enthusiast and wordsmith, Jon Bell writes from his home base near Portland, Oregon. His work has appeared in "Backpacker," "The Oregonian," "The Rowing News," "Oregon Coast," and many other publications. He is also co-author of the climbing guidebook, "Ozone," and a former president of the Ptarmigans Mountaineering Club. He lives in Lake Oswego, Oregon, with his wife, two kids, and a black Lab.

"[An] evocative exploration of the Mount Fuji of America. Open the book and climb."
Bruce Barcott, author of The Measure of a Mountain

"It took more than a decade, but Mount Hood now has a book to rival Mount Rainier's."
The Oregonian

"[On Mount Hood] offers a satisfying mix of interviews and facts about one of the state’s most recognizable features. Jon takes the reader along on his quest to learn more about the iconic mountain that dominates the Portland metro-area landscape. His authorial voice—as he asks questions, delves into history and demystifies geological phenomena—is professional and personal. Well-muscled sentences push the reader to consider the peak’s past, present and future and how its presence has affected us as human beings. On Mount Hood is a relevant read for anyone who has ever climbed Mount Hood, skied there, gasped at its immensity from the plane window, noted 'The mountain’s out today,' or tasted tap water in the Portland metro area."
Brave on the Page

"This first-person narrative biography of Oregon's legendary Mount Hood blends tales of adventure and adversity with history, geology and trivia. Bell interviews several people familiar with the mountain—including a forest activist, a volcanologist and a pararescue jumper—to help tell the story of this iconic Northwest peak."
Alaska Airlines Magazine

"Mt. Hood’s story is vast, and critics have hailed Jon Bell for tackling it with devotion... To comprehend the enormity of writing the biography of the mountain, one must consider Mt. Hood as the site of massive glaciers and pure alpine waters, as well as tiny earthquake 'swarms,' rocky lahar mudslides, mini-avalanches, and  plumes of potentially poisonous sulpher-dioxide fumarole gas. Its foothills boast recreation enthusiasts and the faint wagon tracks of the Oregon Trail’s Barlow Road. Some seek it for the powerful ideals embodied in every aspect of the historic Timberline Lodge, a monument to the collective human spirit in the era of the Great Depression."
KATU.com

"On Mount Hood tells the story of Mount Hood in a way that’s surprisingly never been done before, and through anything and everything related to the mountain: news, conditions, trails, campsites, wines, accidents, triumphs, stories, connections, and much, much more."
Oregon Lakes & Rivers

"Jon Bell takes his readers around the mountain with style. Along the way, he also tours some of the personal connections, past and present, that make Hood such an iconic Northwest place."
Jack Nisbet, author of David Douglas, a Naturalist at Work