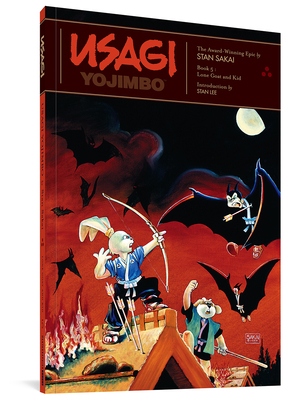 This is book number 5 in the Usagi Yojimbo series.

Usagi faces Ninja bats and the "Lone Goat and Kid." "Frost and Fire" and "The Way of the Samurai" provide psychological drama, and "A Kite Story" is a fascinating look at the life and work of a 17th century Japanese kite maker.

This fifth volume collects the epic-length "Blood Wings," in which Usagi battles a fearsome clan of ninja bats, while "Lone Goat and Kid" offers a cunning and affectionate parody of the famous "Lone Wolf and Cub" manga while doubling as one of Usagi's most dramatic and heartfelt adventures. "Frost and Fire" and "The Way of the Samurai" provide the psychological drama of this volume, which is rounded out by one of the most unique Usagi tales ever, "A Kite Story," which doubles as a fascinating look at the daily life and work of a 17th century Japanese kite maker, dramatically showcasing the thoroughness of Sakai's research and his skills as a storyteller. Featuring a foreword by the legendary Stan Lee!

I’ve just finished the fourth Usagi Yojimbo trade and the fifth is sitting next to me... If you’re like me, throw away your preconceptions about anthropomorphic comics and get on board. As a fan of samurai fiction (to the point of having a Seven Samurai tattoo) and comics, I can’t recommend Stan Sakai’s beautifully drawn, note-perfect reinvention of the genre highly enough.