Next to Normal (Paperback) 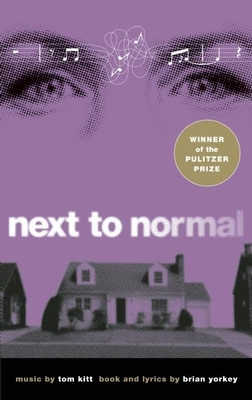 By Brian Yorkey, Tom Kitt
$14.95
On our shelves now at one or more of our stores

Winner of the 2010 Pulitzer Prize for Drama

"Rock is alive and rolling like thunder in "Next to Normal." It's the best musical of the season by a mile . . . an emotional powerhouse with a fire in its soul and a wicked wit that burns just as fiercely."--"Rolling Stone"

"No show on Broadway right now makes as a direct grab for the heart--or wrings it as thoroughly--as "Next to Normal" does. . . . It] focuses squarely on the pain that cripples the members of a suburban family, and never for a minute does it let you escape the anguish at the core of their lives. "Next to Normal" does not, in other words, qualify as your standard feel-good musical. Instead this portrait of a manic-depressive mother and the people she loves and damages is something much more: a feel-everything musical, which asks you, with operatic force, to discover the liberation in knowing where it hurts."--Ben Brantley, "The New York Times"

Winner of three 2009 Tony Awards, including Best Original Score (Music and/or Lyrics) Written for the Theatre, "Next to Normal" is also available in an original cast recording. It was named Best Musical of the Season by "Rolling Stone," "The Washington Post," "Los Angeles Times," and "The New York Times.

Brian Yorkey received the 2009 Tony Award for Best Original Score for his work on Next to Normal and was also nominated for Best Book of a Musical. His other credits include Making Tracks and Time After Time.Tom Kitt received two 2009 Tony Awards for Best Original Score and Best Orchestrations for Next to Normal. He also composed the music for High Fidelity and From Up Here. His string arrangements appear on the new Green Day album 21st Century Breakdown, and he is the leader of the Tom Kitt Band.