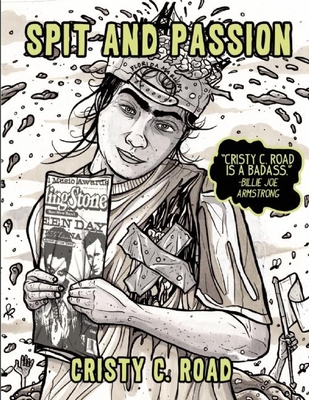 Spit and Passion is about the transformative moment when music crashes into a stifling adolescent bedroom and saves you--suddenly, you belong. In this graphic memoir, cult illustrator Cristy C. Road brings to vivid life the experiences of a queer-identified Latina punk rocker (Bitch).

At twelve years old, Cristy is trying to balance the values of a Cuban Catholic family with her newfound queer identity, and begins a chronic obsession with the punk band Green Day. In this stunning memoir, Road renders the clash between her rich inner world of fantasy and the numbing suburban conformity she is surrounded by. She finds solace in the closet--where she lets her deep excitement about punk rock foment and, in that angst and euphoria, finds a path to self-acceptance.

Cristy C. Road has reached cult status for work that captures the beauty of the imperfect. Her career began with Greenzine, a punk rock zine, which she made for ten years. She has since published Indestructible, an illustrated novel about high school; Distance Makes the Heart Grow Sick, a postcard book; and Bad Habits, a love story about self-destruction and healing. She has also illustrated countless album covers, book jackets, and political organization propaganda. She lives in Brooklyn, New York.

Cristy C. Road is a Cuban-American artist, writer and musician who'sbeen supplying creativity for punk rock, publishing, & social justicemovements since she was a teenager in Miami, circa1997. Road self-publishedGreen'zine for ten years, and has since released three illustrated novels whichtackle gender, sexuality, mental health and cultural identity; truthfully spokenwith curse words and bathroom humor: "Indestructible" (2005), "BadHabits" (2008), "Spit and Passion" (2013), and her most recent project, TheNext World Tarot, a traditionally illustrated Tarot deck depicting resilience andrevolution. C.Road's illustrations has been featured in New York Magazine, TheAdvocate, The New York Times, Maximumrocknroll, Razorcake, Bitch Magazine, Bust Magazine, and countless other publications; as well as on shirts, recordalbum covers, concert and political advocacy posters worldwide.As a musician, Road is a songwriter and guitarist. She fronted the pop-punkgroup The Homewreckers for eight years, and currently fronts her new project, Choked Up.Road has been touring nationally and internationally on her own, with herpunk rock bands, and with Sister Spit: The Next Generation since 2001.Cultivating a performance trajectory with a consistent show of defiance, sheperforms at bookstores, record stores, basements, bars, college campuses, andbeyond.She is a Gemini and lives and works in Brooklyn, NY.

"I'm a big Cristy C. Roads fan. Spit & Passion is a graphic delight, and the depiction of awkward youth is spot-on, weird, and familiar.
Alison Bechdel, author of Fun Home

"Cristy C. Road is the Jack Kerouac of the young queer generation. She's as brilliant a writer as she is an illustrator."Kate Bornstein, author of A Queer and Pleasant Danger