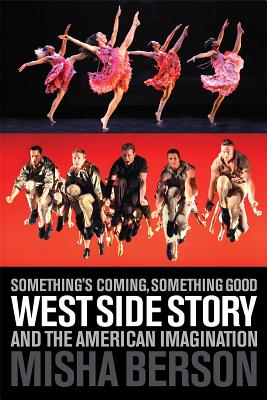 By Misha Berson
$19.99
On our shelves now at one or more of our stores

Something's Coming, Something Good: West Side Story and the American Imagination takes a critical, comprehensive look at one of the most inventive, influential, and internationally beloved Broadway musicals of all time - from its inception by a brilliant quartet of creators (Robbins, Bernstein, Sondheim, and Laurents) to its smashing success on film, to its ongoing popularity on stages around the world and its potent impact on the Great American Musical. Featuring intriguing chapters on West Side Story in relation to Romeo and Juliet; as a recording phenomenon; as a film rated the second-best movie musical of all time by the American Film Institute; as part of a wave of juvenile delinquency dramas; as the first great choreographer-auteur musical; and as the granddaddy of "youth musicals" such as Hair and Rent, Something's Coming, Something Good is a revealing guide for those who have seen the show; for those who wish to study it for pleasure or inspiration; and for actors, designers, and directors planning on producing it.