So Much Blue: A Novel (Paperback) 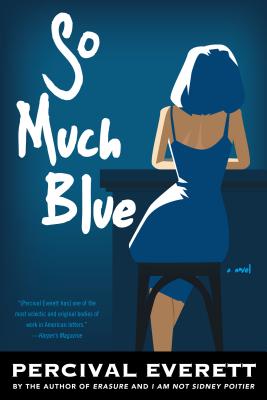 Middle-aged painter Kevin Pace is a philandering husband and a mediocre father. He's also keeping some pretty hefty secrets. He shouldn't be a likeable guy, and yet he really is. Sure, he might be cheating on his wife, but his complete bafflement at the situation somehow charms. I walked away giddy, and half in love with this flawed, deeply feeling, oblivious, good and caring man. We get these glimpses of unlikely charm as Kevin recalls three seminal events from his life; his current day home life, an affair in Paris about 10 years back, and a mysterious trek to El Salvador from his early adulthood. Through these experiences he explores the nature of family and friendship, love and art and we uncover the complexities of guilt, loyalty, and connection. And then there's the mysterious and enormous painting done entirely in shades of blue. His life's work, and Kevin hasn't shown it to anyone. Not his best friend, not his children, not his wife. Percival Everett's skill and cleverness in juggling each piece of this tangled narrative leaves you racing for the end. Can he really pull it off? Don't worry, he doesn't disappoint.

“The newest release from Percival Everett provides ample proof that he is one of the most underrated writers in American literature. So Much Blue jumps among three different points in protagonist Kevin Pace's life that have shaped his artistry as a painter and his misgivings as a man. These vignettes are sardonic, shocking, and sexy. Like life, Everett's latest doesn't give you an easy tie-it-up-in-a-nice-bow revelation - instead, it leaves you thinking about these characters days after you've closed the book, mulling over their futures as well as yours.”
— Dante Bostic, Greenlight Bookstore, Brooklyn, NY

A new high point for a master novelist, an emotionally charged reckoning with art, marriage, and the past

Kevin Pace is working on a painting that he won’t allow anyone to see: not his children; not his best friend, Richard; not even his wife, Linda. The painting is a canvas of twelve feet by twenty-one feet (and three inches) that is covered entirely in shades of blue. It may be his masterpiece or it may not; he doesn’t know or, more accurately, doesn’t care.

What Kevin does care about are the events of the past. Ten years ago he had an affair with a young watercolorist in Paris. Kevin relates this event with a dispassionate air, even a bit of puzzlement. It’s not clear to him why he had the affair, but he can’t let it go. In the more distant past of the late seventies, Kevin and Richard traveled to El Salvador on the verge of war to retrieve Richard’s drug-dealing brother, who had gone missing without explanation. As the events of the past intersect with the present, Kevin struggles to justify the sacrifices he’s made for his art and the secrets he’s kept from his wife.

So Much Blue features Percival Everett at his best, and his deadpan humor and insightful commentary about the artistic life culminate in a brilliantly readable new novel.

Percival Everett is the author of more than twenty books. He is the recipient of the Hurston/Wright Legacy Award and the PEN Center USA Award for Fiction. He teaches at the University of Southern California and lives outside Los Angeles.

“By turns funny, shocking and heartbreaking, it’s one of his best books to date. And with a career as distinguished as Everett’s, that's saying something. . . . It’s not surprising that So Much Blue is such a perfectly structured novel; Everett is an author who started his career off strong and just keeps getting better. It’s a generous, thrilling book by a man who might well be America’s most under-recognized literary master, and readers will be thinking about it long after the last page.”—NPR.org

“Three stories, scattered across time, fuse into one stunning tale in Percival Everett’s latest novel. Each individual strand of So Much Blue has a page-turning urgency of its own — but taken together they add up to a masterpiece.”—Boston Globe

“This quiet, wise novel is like a flame: illuminating, and cool blue at the core.”—The Village Voice

“Tightly wound and slow-burning. . . . Americans dabbling in politics, drugs, bloodsport south of the border; an American indulging in faithless love in Paris; class posturing among Americans in Rhode Island — Everett has blended these disparate strands of an imagined life into a quietly beguiling novel. That he’s constructed it on an edifice of clichés, sanded down and transformed into combustive elements, is a sign of his mastery of the form.”—New York Magazine

“In Everett’s eloquent telling, art and life are . . . beautiful and rare, and the source of myriad choices.”—Houston Chronicle

“[So Much Blue is] essential for understanding [Percival Everett’s] multifaceted career, and it might also be key to recognizing a new form of literary social critique. . . . The process of piecing together this shattered triptych may yield a rich reward.”—The Nation

“So Much Blue is a masterstroke of a novel that blends biting humor, beautiful ekphrasis and heartbreaking pathos in a stirring, unforgettable composition.”—Shelf Awareness, starred review

“As its narrative threads combine, So Much Blue becomes a taut meditation on the costs of keeping vital or traumatic experiences to yourself.”—The Seattle Times

"The novel’s ruminations on confidences and loyalty are cleverly explored through punch, dry humor — Kevin’s time in San Salvador is filled with surprising comedy — and Everett’s writing is, as ever, filled with heart. . . . The latest work from a great American author, So Much Blue is another fine book in Everett’s vast collection.”—The Gazette (Cedar Rapids)

“It is a testament to Percival Everett’s enormous talent that . . . So Much Blue does succeed in meshing its wildly different parts into a whole. . . . Everett brings something to the contemporary American novel that is . . . sorely missing: utter fearlessness in placing demands upon a reader combined with real compassion for ordinary people. . . . [H]e possesses . . . an extraordinarily deft capacity for rendering human foibles without contempt.”—n+1

“So Much Blue is a book unlike any I had read before: part detective thriller, part philosophy, and a nuanced, eloquent treatment of race and art.”—Michael Magras

“Engrossing. . . . [Percival Everett’s] deft plotting and wry wit sustain multiple levels of intrigue, not only about how each of the subplots resolves itself, but how they all fit together.”—Kirkus Reviews, starred review

“Art, friendship, family, and sex all jostle for priority of focus in the prolific Everett’s contemplative new novel. . . . [An] intellectually provocative work.”—Publishers Weekly

“Finely executed. . . . Literary chameleon [Percival] Everett can veer from wicked cultural satire (Erasure, one of the most inventive novels of this young century) to absurdism to action fiction, this centrist work will surely appeal to Everett readers, and its self-reflective realism should bring in some news ones as well.”—Library Journal

“In his always insightful style, Everett offers a portrait of a man sensitive to the slightest nuance of color and composition but often oblivious to the complexities and subtleties of human relationships, a man struggling to unite the pieces of himself into a harmonious whole, a man worthy of love and family.”—Booklist