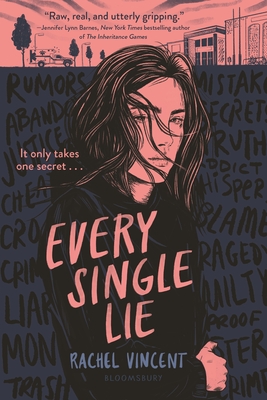 In this gripping YA thriller, a teenage girl's shocking discovery reveals that everyone in her life is lying to her-and if she doesn't figure out the truth, she might be the one to pay the price.

Nobody in sixteen-year-old Beckett's life seems to be telling the whole story. Her boyfriend Jake keeps hiding texts, which could mean he's cheating on her. Her father lied about losing his job and so much more before his shocking death. And everyone in school seems to be whispering about her and her family behind her back.

But none of that compares to the day Beckett finds the body of a newborn baby in a gym bag-Jake's gym bag-on the floor of her high school locker room. As word leaks out, rumors that Beckett's the mother take off like wildfire in a town all too ready to believe the worst of her.

Beckett soon finds herself facing increasingly dangerous threats and accusations. Nobody believes her side of the story, and as the police investigation unfolds, she discovers that everyone has a secret to hide and the truth could alter everything she thought she knew.

A page-turning thriller set in a small Southern community, Every Single Lie is a jaw-dropping, twisty must-read for fans of Sadie.

Rachel Vincent is the author of Every Single Lie, No One is Alone, and several bestselling, pulse-pounding series for teens and adults. A former English teacher and a champion of the serial comma, Rachel has written more than twenty novels and remains convinced that writing about the things that scare her is the cheapest form of therapy. Rachel shares her home in Oklahoma with three cats, two grown children, and her husband, who's been her number-one fan from the start.

“A razor-sharp mystery that speaks critically about the cruel corners of social media and small-town biases. . . . Enough twists and turns that there is no way to stop turning the pages.” —Booklist, starred review

“A carefully detailed portrait of a fraying family, a scathing look at small-town rumors, and a blunt critique of social media's rapid, rabid tendencies.” —Kirkus Reviews

“Vincent's thriller is an action-packed yet emotional novel that demonstrates just how toxic rumors can be. . . . A realistic and gripping contemporary novel that many teens will thoroughly enjoy. A worthwhile selection for high school and YA public library collections.” —School Library Journal

“A compelling story about how much we can miss about people, even those we love, and the price that can exact.” —BCCB

“Vincent builds the story's tension by using a clever countdown to drive the stakes higher and narrating from alternating points of view.” —Booklist on 100 HOURS

“Thrilling and dangerous, with an ending that will leave you gasping!” —Suzanne Young, New York Times bestselling author of the series THE PROGRAM on BRAVE NEW GIRL

“This perfectly paced, suspenseful, and familiar yet fresh novel will appeal to many readers.” —School Library Journal on BRAVE NEW GIRL