Shades of Rust and Ruin (Hardcover) 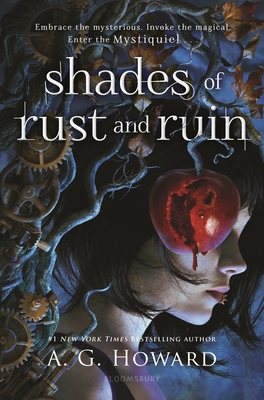 New York Times bestselling author A.G. Howard launches a dark and compelling new YA fantasy series about a girl whose family is cursed by Halloween.

Phoenix “Nix” Loring knows her family is under a Halloween curse. When she was three, her parents tragically died on October 31st. Eleven years later, her twin sister Lark suffered a similar fate.

Ever since, Nix has battled survivor guilt. She can't even find comfort in Clarey, Lark's boyfriend and the one person who understands her pain, because Nix's hidden feelings for him go far beyond friendship. All that remains are her sketches, where she finds solace among the goblins and faeries in her imaginary world of Mystiquel. When her depression starts affecting her ability to see color, Nix all but gives up on her art, until her uncle goes missing on Halloween day. Hot on his trail, Nix and Clarey step through a portal, becoming trapped inside a decaying version of their town filled with Nix's own sketches come to life.

As Nix and Clarey search for her uncle within the sinister and dangerous world of Mystiquel, Nix discovers there's more to her family curse and otherworldly artwork than she ever imagined-and unless she can solve the Goblin King's maze before the clock strikes midnight, her life won't be the only one the curse claims next.

A. G. Howard is the #1 New York Times and international bestselling author of young adult retellings and adult gothic paranormal romances. Her dark Alice in Wonderland series, Splintered, has been published in over a dozen languages and hit the New York Times series list and her Phantom of the Opera retelling Roseblood was a #1 New York Times bestseller.

"Employing deliberate plotting, intricate worldbuilding, and a plethora of mystical creatures, such as cyborg faeries, Howard keenly examines themes of grief and guilt against an eerie backdrop." - Publishers Weekly

“A horror-tinged quest in a crumbling world, filled with evocative, poetic descriptions. . . . This fantasy-horror-steampunk quest will please readers who love complex language, lush descriptions, and plots as twisty and deceptive as Celtic knots.” —SLJ

"Packed with action scenes, detailed world-building, and allusions to other popular media, this will be a crowd-pleaser with avid fantasy readers, likely to appeal to fans of Melissa Marr and Holly Black." -BCCB