We All Wore Blue (Hardcover) 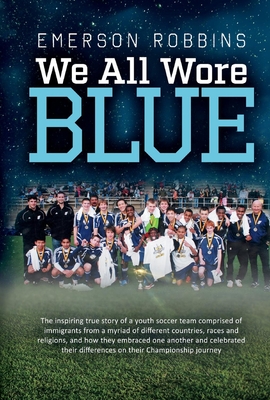 The true account of a racially diverse youth soccer team comprised largely of immigrant players from a multitude of different countries, races and religions who achieve the unthinkable in this entertaining true account of inclusion, acceptance and brotherhood on the tattered road to victory. The story tells how this diverse collection of immigrant boys and their families bond with the existing white American players and families, coming together to overcome numerous challenges, adversity and racism. Though they had little in common, other than their love of the game, they became an extended family of sorts and learned to embrace one another and celebrate their differences on their path to winning several State Championships. A truly inspirational story for our country and world and a unifying message for these turbulent times.

Emerson Robbins coached youth soccer teams for over thirty-five years, while also founding and running several prominent businesses.
Robbins was named Coach of the Year for Seattle in 2007, Coach of the Year for Washington State in 2008 and COY for the Western U.S. in 2009. This true story was inspired by the FC Shoreline International team that he coached from 2005 through 2010. This is Emerson Robbins second book. He retired from coaching in 2018 and currently resides with his wife on Whidbey Island in WA State.