The Story of a Brief Marriage (MP3 CD) 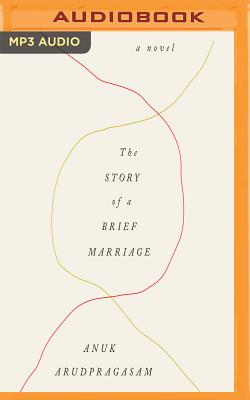 Shortlisted for the Dylan Thomas Prize

Two and a half decades into a devastating civil war, Sri Lanka's Tamil minority is pushed inexorably towards the coast by the advancing army. Amongst the evacuees is Dinesh, whose world has contracted to a makeshift camp where time is measured by the shells that fall around him like clockwork. Alienated from family, home, language, and body, he exists in a state of mute acceptance, numb to the violence around him, till he is approached one morning by an old man who makes an unexpected proposal: that Dinesh marry his daughter, Ganga. Marriage, in this world, is an attempt at safety, like the beached fishing boat under which Dinesh huddles during the bombings. As a couple, they would be less likely to be conscripted to fight for the rebels, and less likely to be abused in the case of an army victory. Thrust into this situation of strange intimacy and dependence, Dinesh and Ganga try to come to terms with everything that has happened, hesitantly attempting to awaken to themselves and to one another before the war closes over them once more.

Anuk Arudpragasam's The Story of a Brief Marriage is a feat of extraordinary sensitivity and imagination, a meditation on the fundamental elements of human existence - eating, sleeping, washing, touching, speaking - that give us direction and purpose, even as the world around us collapses. Set over the course of a single day and night, this unflinching debut confronts marriage and war, life and death, bestowing on its subjects the highest dignity, however briefly.