Reimagining Capitalism in a World on Fire (Hardcover) 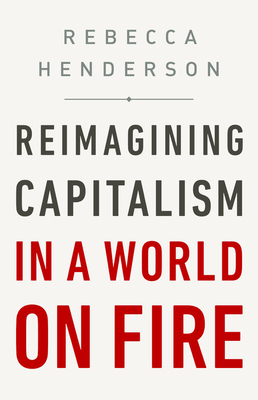 By Rebecca Henderson
$28.00
On our shelves now:

A renowned Harvard professor debunks prevailing orthodoxy with a new intellectual foundation and a practical pathway forward for a system that has lost its moral and ethical foundation in this "powerful" book (Daron Acemoglu).
Free market capitalism is one of humanity's greatest inventions and the greatest source of prosperity the world has ever seen. But this success has been costly. Capitalism is on the verge of destroying the planet and destabilizing society as wealth rushes to the top. The time for action is running short.

Rebecca Henderson's rigorous research in economics, psychology, and organizational behavior, as well as her many years of work with companies around the world, gives us a path forward. She debunks the worldview that the only purpose of business is to make money and maximize shareholder value. She shows that we have failed to reimagine capitalism so that it is not only an engine of prosperity but also a system that is in harmony with environmental realities, striving for social justice and the demands of truly democratic institutions.

Henderson's deep understanding of how change takes place, combined with fascinating in-depth stories of companies that have made the first steps towards reimagining capitalism, provides inspiring insight into what capitalism can be. With rich discussions of how the worlds of finance, governance, and leadership must also evolve, Henderson provides the pragmatic foundation for navigating a world faced with unprecedented challenge, but also with extraordinary opportunity for those who can get it right.

Rebecca Henderson is the McArthur University Professor at Harvard University (the highest honor that can be awarded to a faculty member), where she teaches the acclaimed course on "Reimagining Capitalism." Henderson spent the first twenty-one years of her career at MIT's Sloan School where she was "teacher of the year" and where her research focused on the economics of innovation and on the question of how large organizations can reinvent themselves..

Inducted in to the American Academy of Arts and Science in 2018, Henderson is also a Research Fellow at the National Bureau of Economic Research and the recipient of a number of academic prizes, including most recently the Viipuri Prize for strategy research and a recent election to the British Academy.

Henderson's academic career is complemented by a deep engagement with the practice of management. She has been on the boards of Amgen, a Fortune 200 company, for eight years, and Idexx, an S&P 500 company, for fifteen. She has also consulted with a wide variety of companies including IBM, Motorola, Cisco, Nokia, Eli Lilly, BP, ENI, Unilever, P&G, and many smaller firms, and is routinely invited to speak to executives across the world.

"Henderson's convincing arguments and passion will be a clarion call to action for business leaders and interested readers everywhere."—Library Journal, starred review

"Lucid and optimistic...this accessible and richly detailed call to action offers a clear vision for policy makers and business executives who agree with Henderson that the private sector has an obligation to tackle the world's biggest problems."—Publishers Weekly

"A well-constructed critique of an economic system that, by the author's account, is a driver of the world's destruction... A readable, persuasive argument that our ways of doing business will have to change if we are to prosper-or even survive."—Kirkus Reviews

"This powerful and readable book is a clarion call for reimagining and remaking capitalism. The market economy, which used to generate rapid productivity growth and shared prosperity, has done much less of that over the last four decades. The shifting balance of power in favor of large companies and lobbies, the gutting of basic regulations, the increasing ability of corporations and the very rich to get their way in every domain of life, and the unwillingness of the government to step up to protect its weakest citizens are likely responsible for low productivity growth and ballooning inequality in the US economy. Rebecca Henderson argues that the market system can be reformed and this can be done without unduly harming corporations. We can have a more moral and more innovative capitalism. There is hope!"—Daron Acemoglu, coauthor of Why Nations Fail

"If you are unsatisfied with today's economic arguments--which too often seem to present an unappealing choice between unbridled markets and old-school collectivism--you need to read Rebecca Henderson's Reimagining Capitalism in a World on Fire. Henderson offers a system that rewards initiative and respects the power of free enterprise, but that also recognizes that we have a higher purpose in life than pure profit maximization. This is a book for the realist with a heart."—Arthur C. Brooks, president emeritus, American Enterprise Institute; professor of practice, Harvard Kennedy School; senior fellow, Harvard Business School; and author of Love Your Enemies

"Rebecca Henderson is masterful in both elegant articulation of one of society's great challenges and clarity of vision in laying out a roadmap for practical and essential change. Reimagining Capitalism is a great read, full of insights, and a refreshing perspective that is new, practical, and ground-breaking, offering clear steps for transitioning to a capitalism that is both profitable as well as just and sustainable."—Mindy Lubber, CEO and president, CERES

"Rebecca Henderson is a provocative thinker on the purpose of business in society. In her new book, she advances the dialogue about the role of business in addressing the big social and environmental challenges of our time. Hers is an important voice in an essential conversation."—Doug McMillon, president and chief executive officer, Walmart

"In a world on fire, status quo is not a great option. Rebecca Henderson rightfully argues for a refoundation of business and capitalism and offers thought-provoking ideas on what needs to be done to address some of the world's greatest challenges."—Hubert Joly, former chairman and CEO, Best Buy

"A must-read for every person with a stake in our economic system since change or die is the inescapable reality confronting capitalism. The question is how. Rebecca Henderson provides investors and corporate executives with the thought leadership and compelling examples foundational for understanding how to deliver sustainable and inclusive economic growth."—Hiro Mizuno, executive managing director and chief investment officer, GPIF


"Capitalism as we know it has gotten us this far, but to take the next steps forward as a society and species we need new ways of seeing and acting on our world. That's exactly what Rebecca Henderson's book helps us do. This is a smart, timely, and much-needed reimagining of what capitalism can be."—Yancey Strickler, cofounder and former CEO, Kickstarter, and author of This Could Be Our Future: A Manifesto for a More Generous World


"A breakthrough book, beautifully written, combining deep humanity, sharp intellect, and a thorough knowledge of business. It rigorously dismantles old arguments about why capitalism can't be transformed and will reach people who haven't yet connected with the need for deep change."—Lindsay Levin, founding partner, Leaders' Quest and Future Stewards

"With great clarity and passion, Rebecca Henderson provides a stellar guide to building a purpose-driven organization, the surest path to success in a time of rising temperatures and declining trust."—Andrew McAfee, author of More from Less and coauthor of The Second Machine Age and Machine, Platform, Crowd

"Rebecca Henderson weaves together research and personal experience with clarity and vision, illustrating the potential for business to benefit both itself and society by leading on the most challenging issues of our day. Read, and feel hopeful."—Judith Samuelson, vice president, the Aspen Institute

"Reimagining Capitalism is a breath of fresh air. Written in lively prose, easily accessible to lay readers, and chock full of interesting case studies, Henderson comprehensively surveys what we need to secure a workable future. Some readers may think she goes too far in places, others may think she doesn't go far enough, but everyone will want to think about the economy she urges us to create."—Larry Kramer, president of the Hewlett Foundation