Bending the Arc: My Journey from Prison to Politics (Hardcover) 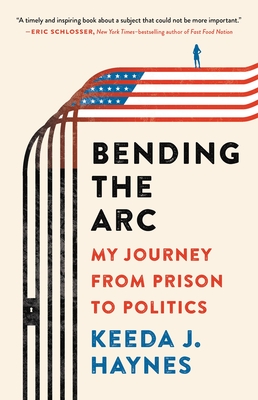 A searing exposé of the profound failures in our justice system, told by a woman who has journeyed from wrongfully accused prisoner to acclaimed public defender

Keeda Haynes was a Girl Scout and a churchgoer, but after college graduation, she was imprisoned for a crime she didn’t commit. Her boyfriend had asked her to sign for some packages—packages she did not know were filled with marijuana. As a young Black woman falsely accused, prosecuted, and ultimately imprisoned, Haynes suffered the abuses of our racist and sexist justice system. But rather than give in to despair, she decided to fight for change. After her release, she attended law school at night, became a public defender, and ultimately staged a highly publicized campaign for Congress. At every turn of her unlikely story, she gives unique insights into the inequities built into our institutions. In the end, despite the injustice she endured, she emerges convinced that ours can become a true second-chance culture.

Keeda J. Haynes is a criminal justice reform advocate and a former Nashville public defender who works to bring to light the inequities in the criminal justice system. She currently serves as the Voting Rights Campaign Strategist with The Sentencing Project, and formerly served as the Legal Advisor to the non-profit organization Free Hearts. In 2020, she campaigned with hopes to become the first Black congresswoman to represent Tennessee. She lectures nationwide on her compelling story and cutting-edge issues in the criminal justice system. She lives in Nashville, Tennessee.

"The author’s story is both inspiring and heartbreaking, and her voice is simultaneously impassioned and informed. Haynes is adept at using her personal experience to illustrate general truths about the flaws in the criminal justice system as well as specific avenues for reform… A gripping, passionate memoir about a wrongly incarcerated Black woman's drive for judicial reform."
—Kirkus

"Haynes’ candor, persistence, and drive are palpable and inspirational. In relaying her story, she seamlessly acknowledges larger systemic and racial issues, elucidating flaws in the system at every turn. . . She is an important voice of experience, having participated in the justice system as both a prisoner and an attorney.”
—Booklist

“Highly recommended. . . Haynes’s perseverance, compassion, and relatability create a memoir that will stick with readers long after the last page.”
—Library Journal

“Keeda Haynes suffered a great injustice, struggled, overcame it, and devoted her life to fighting against a criminal justice system responsible for tremendous harm. This is a timely and inspiring book about a subject that could not be more important.”
—Eric Schlosser, New York Times–bestselling author of Fast Food Nation

“Heartrending and heartwarming. Haynes exposes the deep flaws in our justice system, all the while exemplifying the importance of second chances.”
—Austin Channing Brown, New York Times-bestselling author of I’m Still Here

“A rallying story of horrific injustice and inspiring perseverance. Haynes’ account of wrongful imprisonment will ignite you into action.”
—Valarie Kaur, filmmaker and author of See No Stranger

“The combination of lived experience with frontline legal expertise creates a riveting story that speaks directly to how we confront the racist underpinnings of mass incarceration by placing humanity and community first.”
—Amy Fettig, Executive Director of The Sentencing Project

“Keeda Haynes is strong, smart, and resilient. The story of her life is inextricably tied with an examination of our flawed justice system from nearly every possible angle. I came to know Keeda as a gifted and passionate advocate. I now know her to be a terrific writer. Read Bending the Arc.”
—Kevin Ring, president of Families Against Mandatory Minimums

“More than a coming-of-age story, Bending the Arc takes readers on a journey through the U.S. criminal justice system.  Haynes’ book is filled with heartbreak, triumph, and resilience, offering an intimate portrait of a criminal justice system that is callous and fueled by systemic racism, patriarchy, and class hierarchy.  Her survival is a testament to familial bonds, community members and allies in the legal profession who believed in second-chance opportunities and the continued struggle for freedom and justice.”
—Sekou Franklin, Associate Professor of Political Science at Middle Tennessee State University

“In Bending the Arc, attorney-activist Keeda Haynes scribes new stanzas, in registers of resistance, of cages, courts, community, and courage.  No mere coming-of-age tale of adversity and triumph, her story testifies to the collective power of Black women nurturing, sustaining us towards new incarnations of justice.”
—Dr. Phyllis Hildreth, Vice President for Institutional Strategy and Academics at American Baptist College