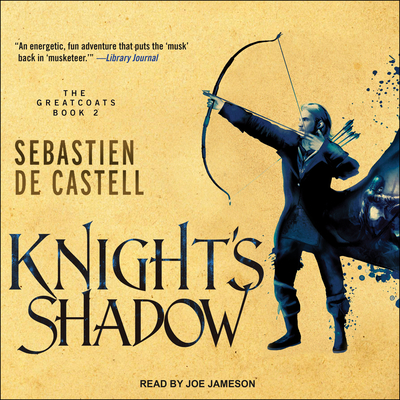 By Sebastien Castell, Joe Jameson (Narrated by)
$54.99
Out of stock, usually available in 1-5 days

This is book number 2 in the Greatcoats series.

Following his beloved debut, Traitor's Blade, Sebastien de Castell returns with volume two of his fast-paced fantasy adventure series, inspired by the swashbuckling action and witty banter of The Three Musketeers. Knight's Shadow continues the series with a thrilling and dark tale of heroism and betrayal in a country crushed under the weight of its rulers' corruption. A few days after the horrifying murder of a duke and his family, Falcio val Mond, swordsman and First Cantor of the Greatcoats, begins a deadly pursuit to capture the killer. But Falcio soon discovers his own life is in mortal danger from a poison administered as a final act of revenge by one of his deadliest enemies. As chaos and civil war begin to overtake the country, Falcio has precious little time left to stop those determined to destroy his homeland.