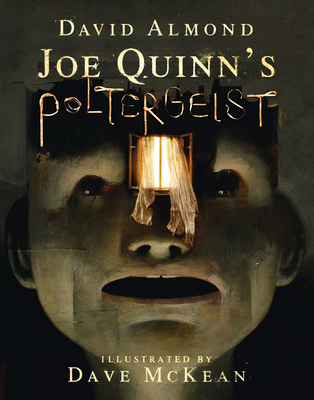 By David Almond, Dave McKean (Illustrator)
$17.99
Out of stock, usually available in 3-10 days

There’s a poltergeist in Joe Quinn’s house, and Davie is determined to discover its source in this lively, hopeful graphic storybook from David Almond and Dave McKean.

Joe Quinn has been telling everyone about the poltergeist in his house, but no one believes him. No one, that is, except Davie. Davie’s felt the inexplicable presence in the Quinns’ house and seen random objects fly through the air. And there’s something else . . . a memory of Davie’s beloved sister and a feeling deep down that it might just be possible for ghosts to exist. Full of thoughts of hauntings and grief and God, Davie hovers on a precipice of uncertainty and possibility, a space that storyteller David Almond occupies comfortably and returns to again and again — here paired once more with the dynamic, dreamlike mixed-media art of Dave McKean.

David Almond has received numerous awards, including a Hans Christian Andersen Award, a Carnegie Medal, and a Michael L. Printz Award. He is the author of Skellig, Clay, and many other stories, including Harry Miller’s Run, illustrated by Salvatore Rubbino; The Savage, Slog’s Dad, and Mouse Bird Snake Wolf, all illustrated by Dave McKean; and My Dad’s a Birdman and The Boy Who Climbed Into the Moon, both illustrated by Polly Dunbar. David Almond lives in England.

Dave McKean is an illustrator whose work has been awarded a Nestlé Smarties Children’s Book Prize Gold Medal and been honored as a New York Times Book Review Best Illustrated Children's Book of the Year. He has illustrated many children’s books, including Neil Gaiman’s The Day I Swapped My Dad for Two Goldfish, Coraline,and the Newbery Medal–winning The Graveyard Book, as well as three critically acclaimed collaborations with David Almond. Dave McKean lives in England.

The art amplifies the characteristically dark, rich tones of Almond's prose all the way to a final Dylan Thomas-style promise that "the world and all that's in it will continue to…hold us in its darkness and its light."... A keen collaboration moving seamlessly between worlds inner and outer, natural and supernatural.
—Kirkus Reviews (starred review)

McKean restores a sense of compromised hope to complement Almond’s conclusion through a mix of dark greens with a smidge of yellow light above Davie’s head and the town itself, making this a marvelous lesson in visual metaphor as well as a thought-provoking horror story.
—Bulletin of the Center for Children's Books