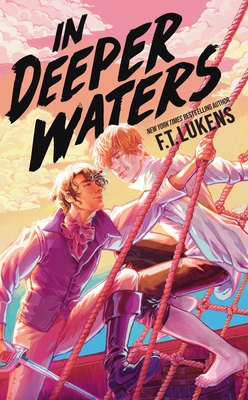 “A frothy confection of sea-foam, young love, and derring-do.” —NPR

From the New York Times bestselling author of So This Is Ever After, a young prince must rely on a mysterious stranger to save him when he is kidnapped during his coming-of-age tour in this swoony adventure that is The Gentleman’s Guide to Vice and Virtue meets Pirates of the Caribbean.

Prince Tal has long awaited his coming-of-age tour. After spending most of his life cloistered behind palace walls as he learns to keep his forbidden magic secret, he can finally see his family’s kingdom for the first time. His first taste of adventure comes just two days into the journey, when their crew discovers a mysterious prisoner on a burning derelict vessel.

Tasked with watching over the prisoner, Tal is surprised to feel an intense connection with the roguish Athlen. So when Athlen leaps overboard and disappears, Tal feels responsible and heartbroken, knowing Athlen could not have survived in the open ocean.

That is, until Tal runs into Athlen days later on dry land, very much alive, and as charming—and secretive—as ever. But before they can pursue anything further, Tal is kidnapped by pirates and held ransom in a plot to reveal his rumored powers and instigate a war. Tal must escape if he hopes to save his family and the kingdom. And Athlen might just be his only hope…

F.T. Lukens is a New York Times bestselling author of YA speculative fiction including the novels So This Is Ever Afterand In Deeper Waters (2022 ALA Rainbow Booklist; Junior Library Guild Selection) as well as other science fiction and fantasy works. Their contemporary fantasy novel The Rules and Regulations for Mediating Myths & Magic was a 2017 Cybils Award finalist in YA Speculative Fiction and the Foreword INDIES Book of the Year Gold Winner for YA fiction and won the Bisexual Book Award for Speculative Fiction. F.T. resides in North Carolina with their spouse, three kids, three dogs, and three cats.

"Pirates and princes, magic and mayhem, this book has it all! With exciting adventure and a breath-taking romance, I couldn't put In Deeper Waters down!"
— Beth Revis, New York Times bestselling author of Give the Dark My Love and the Across the Universe trilogy

"An enchanting adventure, In Deeper Waters is a tale of secrets, survival, and the relationships that shape us. Lukens fills the pages with magic, humor, and waves of breath-stealing romance. An inescapably great read!"
— Julian Winters, award-winning author of Running With Lions

"In Deeper Waters is a delightful, big-hearted romp that delivers an old-school fantasy feel while also upgrading your favorite genre tropes. Come for the fantasy adventure, stay for the soft romance between a prince and a pirate! An absolute joy from cover to cover."
— Mackenzie Lee, New York Times bestselling author of The Gentleman's Guide to Vice and Virtue

“In Deeper Waters is a siren call of delightful queer fantasy that speaks to the power of kindness and love. Royals, bedsharing, secret magical identities, political conspiracies and shenanigans abound in this immersive vibrant adventure steeped in lore and Lukens' own artfully crafted mythology.”
— C.B. Lee, author of the Sidekick Squad series

* "Lukens has written a richly imagined fantasy, filled with action, suspense, and fully realized characters, that is also a beautiful love story that will touch readers’ hearts and live in their memories."
— Booklist, STARRED REVIEW