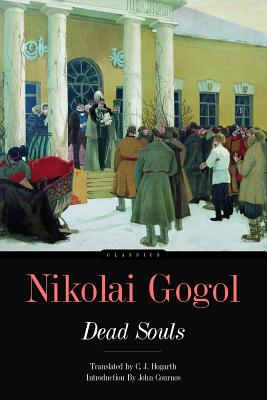 Dead Souls, first published in 1842, is the great prose classic of Russia. That amazing institution, "the Russian novel," not only began its career with this unfinished masterpiece by Nikolai Vasil'evich Gogol, but practically all the Russian masterpieces that have come since have grown out of it, like the limbs of a single tree. Dostoieffsky goes so far as to bestow this tribute upon an earlier work by the same author, a short story entitled The Cloak; this idea has been wittily expressed by another compatriot, who says: "We have all issued out of Gogol's Cloak." Dead Souls, which bears the word "Poem" upon the title page of the original, has been generally compared to Don Quixote and to the Pickwick Papers, while E. M. Vogue places its author somewhere between Cervantes and Le Sage. However considerable the influences of Cervantes and Dickens may have been--the first in the matter of structure, the other in background, humour, and detail of characterisation--the predominating and distinguishing quality of the work is undeniably something foreign to both and quite peculiar to itself; something which, for want of a better term, might be called the quality of the Russian soul. The English reader familiar with the works of Dostoieffsky, Turgenev, and Tolstoi, need hardly be told what this implies; it might be defined in the words of the French critic just named as "a tendency to pity." One might indeed go further and say that it implies a certain tolerance of one's characters even though they be, in the conventional sense, knaves, products, as the case might be, of conditions or circumstance, which after all is the thing to be criticised and not the man. But pity and tolerance are rare in satire, even in clash with it, producing in the result a deep sense of tragic humour. It is this that makes of Dead Souls a unique work, peculiarly Gogolian, peculiarly Russian, and distinct from its author's Spanish and English masters.